PURPOSE: To develop an easily reproducible model of acute lung injury due to experimental muscle trauma in healthy rats.

RESULTS: Twenty-four hours after muscle injury there was a significant increase in lung neutrophil infiltration, myeloperoxidase activity and edema, all reversed by dexamethasone in G-3.

CONCLUSION: Trauma by severance of thigh muscles in healthy rats is a simple and efficient model to induce distant lung lesions.

Acute lung injury (ALI) following musculoskeletal trauma is an important cause of morbidity and mortality in trauma patients1.

Animal experiments represent a very useful tool to explore the pathogenesis of different diseases and to evaluate novel treatments. Hypotheses generated in human studies can be tested directly in animal models. Different animal models of experimental lung injury have been used to investigate the mechanisms of lung injury2. Studies in primates are relevant for humans but are beyond the reach of most post-graduate students, not only the difficulty of obtaining these animals but also by the elevated cost of acquisition. On other hand, studies with mice or lower animals are relatively simple and rapid to do, but the relevance for humans is limited2. Most models that study ALI rely on clinical disorders commonly associated with this syndrome in humans, namely sepsis, multiple transfusions, multiple trauma, aspiration of gastric contents, and reperfusion of ischemic tissues3,4. Whereas trauma can trigger the onset of acute lung injury we decided to develop a model using muscle trauma as a causative agent of ALI.

The study was designed so as to minimize the number of animals required for the experiments. Eighteen adult Wistar rats weighing 250-300g, were randomized in 3 groups (n=6): G-1- control, G-2 - saline+trauma and G-3 - dexamethasone+trauma. Groups G-1 and G-2 were treated with saline 2,0ml i.p; G-3 rats were treated with dexamethasone (DE) (2 mg/kg body weight i.p.). Saline and DE were applied 2h before trauma and 12h later. All Rats were anestethized by tribromoethanol 97% 100 ml/kg i.p., Trauma was induced in anesthetized G-2 and G-3 using sharp section of anterior thigh muscles just above the knee, preserving major vessels and nerves. Tissue samples (lung) were collected for myeloperoxidase (MPO) assay and histopathological evaluation. Dexamethasone dosage (2 mg/kg body weight) was based in a published study5. Dexamethasone and saline were purchased from standard commercial sources and were of the highest quality available.

Under adequate anesthesia, a 2 centimeter longitudinal incision of the skin extending into the subcutaneous fat and muscular fascia of the right pelvic limb was carried out in G-2 and G-3 rats. Following careful dissection of the anterior muscles of the thigh, a hemostatic Kelly clamp was passed between the muscles and the femur. Next, the anterior muscles of the right thigh were sectioned with a surgical scalp just above the knee. Care was taken to preserve the major vessels and nerves. There was minimal bleeding which stopped spontaneously. The skin was sutured with nylon 3-0. The mean time of the procedure was 7 minutes. Group G1 served as control; G-1 animals were also anesthetized but no surgical procedure was performed. Twenty-four hours later, all animals were killed by cervical dislocation and fragments of lung tissue were removed, collected and stored in a -80ºC freezer until processed for determination of myeloperoxidase activity and for histopathological evaluation of edema and neutrophilic infiltration by methods described previously6,7.

Graphpad Prism 5.0 (GraphPad Software, www.graphpad.com) was used for statistical analysis and graphics design. All data were tested for distribution (Kolmorogov-Smirnov test with Dallal-Wilkinson-Lilliefor P value). Results were expressed as mean+SD.All data were tested for distribution by applying the Kolmogorov-Smirnov test. A Chi-square test was used to evaluate the edema. ANOVA with Boferroni post-test was used to evaluate MPO activity and neutrophil infiltration. 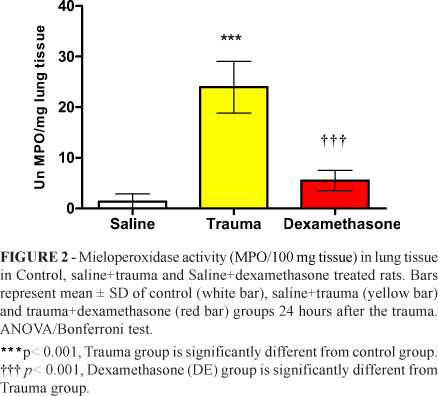 Histological studies showed neutrophil infiltration and edema of lung in rats submitted to trauma (Figure 3, group G-2). This finding was not present in rats treated with dexametasone (Figure 4, G-3). 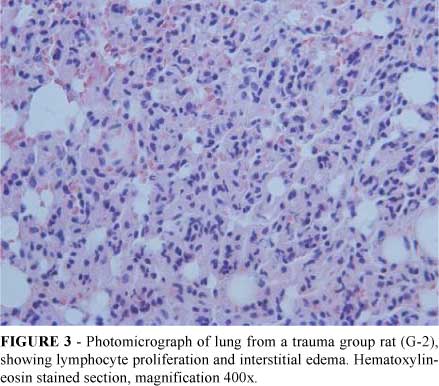 Because corticosteroids may inhibit the action of inflammatory mediators and improve morbidity and mortality in experimental models that induce acute lung injury5,8 dexamethasone was used in this study as a positive control.

In the experimental model described here, muscular injury induced pulmonary lesions similar to those found in acute lung injury within 24 hours, as confirmed by the presence of leukocyte infiltration, neutrophil activation (indirectly measured by myeloperoxidase assay) and pulmonary interstitial edema. It was also demonstrated that these lesions could be reduced by dexamethasone administration. There was a statistically significant increase in lung neutrophil infiltration (Figure 1), myeloperoxidase activity (Figure 2) and interstitial edema intensity (Table 1) in rats submitted to trauma. Histopathological findings legitimized, visually, these findings (Figures 3 and 4).

The present experimental model is quite simple and easily reproducible. Bearing in mind that pulmonary lesions are present within 24 hours after the traumatic event, it can be potentially used to study the early events involved in the systemic inflammatory response following trauma injuries.