Morphological aspects of tympanic bulla after ventral osteotomy in cats

PURPOSE: To evaluate tympanic bulla healing after experimental ventral osteotomy in cats. METHODS: Twenty adult cats were submitted to unilateral ventral bulla osteotomy and divided into two groups: cats of A1 group (n=10) were euthanized at 8 weeks and cats of A2 group (n=10), at 16 weeks postoperative. RESULTS: Signs of Horner's syndrome or damage to the inner ear were not found. Open-mouth radiographs taken in the immediate postoperative showed interruption in the contour of the larger compartment of the operated bulla. The result of Mcnemar'test was significant in A2 group (*p=0.0156). Macroscopic exams revealed that the operated bullae were similar to the normal ones, with preservation of the tympanic cavity. Connective tissue at the osteotomy site of the larger compartment was significantly found in the operated bullae in both groups (McNemar test: A1 p=0.0020*; A2 p=0.0078*). Histomorphometric analyses showed that the connective tissue length at the osteotomy site was shorter in A2 group than in the A1 group (Mann-Whitney test: p=0.0021*). CONCLUSIONS: Experimental ventral osteotomy did not alter significantly the tympanic bulla conformation and complete regeneration of tympanic bulla frequently did not occur before 16 weeks of postoperative period. 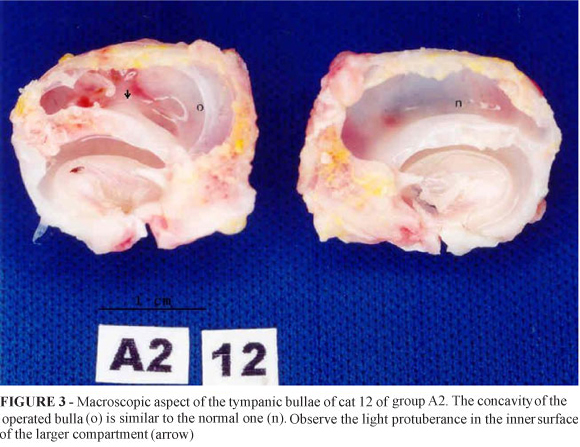