PURPOSE: To analyze and to evaluate the effect of the hyperbaric hyperoxygenation in the mechanical resistance of ischemic colon of rats. METHODS: Eighty rats, distributed in four groups of 20 animals in each one, were used. In group 1 (G1), the control group, ischemia was not caused. Group 2 was submitted to the lesser degree of ischemia. Group 3 was submitted to the intermediate degree of ischemia. In group 4, a bigger degree of intestinal ischemia was provoked. Each group was divided in two sub-groups of ten animals each: with hyperbaric chamber (CC) and without hyperbaric chamber (SC). The animals of the four CC subgroups were placed in an experimental hyperbaric chamber in order to inhale oxygen at 100%, at two Absolute Atmospheres, for 120 minutes, for a four-day consecutive period. The animals of the four SC subgroups were kept in environment air during the five days of the experiment. All animals have been submitted to the mechanical study of the intestinal loop by the pressure test of the rupture by liquid distension. The euthanasia occurred in the fifth post-operative day. RESULTS: Considering the ischemia factor, the four groups were different among them (p=0,0001). There was no statistical difference between subgroups CC and SC (p=0,3461). CONCLUSION: The hyperbaric oxygen-therapy did not present improvement on the induced ischemia in rats upright colic loop. 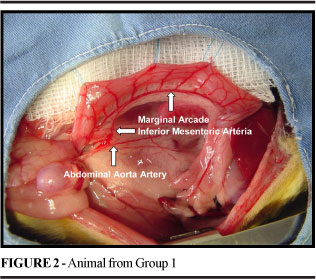 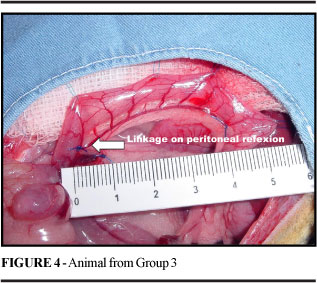 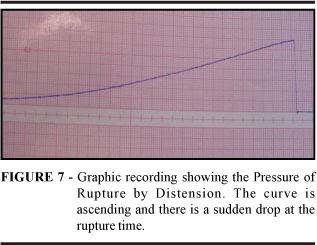 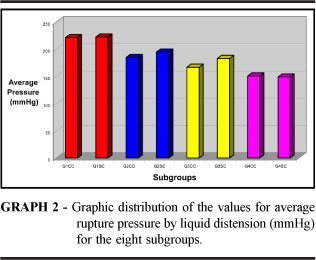