Action of a deproteinized xenogenic biomaterial in the process of bone repair in rats submitted to inhalation of cigarette smoke 1 1 Research performed at Laboratory of Human Morphology, Division of Anatomy, Faculty of Medicine, Universidade de Marília (UNIMAR), Brazil.

To investigate if the inorganic bovine bone matrix changes the bone formation in rats submitted to inhalation of cigarette smoke.

Twenty Wistar rats were divided into two groups: Cigarette Clot Group (CCG), which in the inhalation chamber received the smoke of 10 cigarettes, 3 times a day, 10 minutes, for 30 days and had the surgical cavity filled by clot; Cigarette Biomaterial Group (CBG), submitted to the same inhalation technique but with the cavity filled by biomaterial.

The bone matrix acted as an osteoinductive biomaterial, biocompatible and aided in the repair process, mainly in the initial period of recovery.

Recent studies indicate that the harmful effects of nicotine are dose-dependent, that is, the higher the dose, the greater the negative effects1010 Sopori M. Effects of cigarette smoke on the immune system. Nat Rev Immunol. 2002 May;2(5):372-7. doi: 10.1038/nri803.
https://doi.org/10.1038/nri803... . Despite this, even in low dosage, it can be considered a potential risk factor in the process of reconstitution of bone defects1111 Marinucci L, Balloni S, Fettucciari K, Bodo M, Talesa VN, Antognelli C. Nicotine induces apoptosis in human osteoblasts via a novel mechanism driven by H(2)O(2) and entailing Glyoxalase 1-dependent MG-H1 accumulation leading to TG2-mediated NF-kB desensitization: Implication for smokers-related osteoporosis. Free Radic Biol Med. 2018 Jan 20;117:6-17. [Epub ahead of print]. doi: 10.1016/j.freeradbiomed.2018.01.017.
https://doi.org/10.1016/j.freeradbiomed.... .

Due to the lack of description in the world literature of similar study, we decided to carry out this study with the objective of observing whether the demineralized bovine bone matrix (GenOx, Baumer, Brazil) changes the bone neoformation in rats submitted to inhalation of cigarette smoke, using histomorphological and histomorphometric analysis.

Twenty male Wistar rats (Rattus norvegicus), with average weight of 271.5 grams, were obtained from the Central Animal House of the Universidade de Marília, after approval by the Committee of Ethics in Animal Use (protocol 10/2016).

The animals were kept in a 12 hour light / dark cycle environment, temperature of 22 ± 2°C and relative humidity of 60 ± 5% until the end of the experiment.

The animals were randomly divided into two experimental groups: Cigarette Clot Group (CCG) and Cigarette Biomaterial Group (CBG), which contained 10 animals in each group, as follows:

Animals from all groups received the same solid diet (Nuvilab CR 1 diet from Nuvital, Brazil) “ad libitum” throughout the experiment. After the inhalation period of 30 days all the animals were submitted to the experimental surgery. The animals of both groups continued to inhale the cigarette smoke after undergoing surgery until the period correspondent to euthanasia.

The animals were previously weighed and submitted to general anesthesia with injection of sodium pentobarbital intraperitoneally - IP (Nembutal, 30mg/kg). The tricotomy was performed in the ventral region of the posterior limb and the disinfection of the surgical area with 2% chlorhexidine (Riohex, Rioquímica, Brazil).

With a number 15 scalpel blade (Solidor, Brazil), a 20-mm linear incision was made in the craniocaudal direction in the left pelvic limb, cutting the skin and muscle fascia for exposure and divulsion of the muscular tissue involving the tibia.

The incision extended to the periosteum, allowing its displacement, moving it anterior-posteriorly, thus obtaining a large area of work on the tibia. With a number 6 spherical steel drill (Dentsply, Brazil) mounted on a low-rotation micro-engine (Dabi Atlante, Brazil), a cavity of approximately 3 mm in diameter was prepared and, in depth, reaching the bone marrow. This procedure was performed with abundant irrigation of 0.9% Sodium Chloride solution (Eurofarma, Brazil).

The cavity was made in the longitudinal axis of the bone, and the perforation was made in the proximal third of the tibial diaphysis, which was not filled by any material (clot only) in the Cigarette Clot Group (CCG) and filled with inorganic bovine bone matrix (GenOx, Baumer, Brazil) at the Cigarette Biomaterial Group (CBG).

The operatory acts were always performed by a single operator subjecting the animals to the same conditions. To complete the surgical procedures, the tissues were repositioned, and the sutures performed individually, first in the periosteum with resorbable suture (Shalon, Brazil) and then in the skin with uninterrupted stitches using 4-0 Silk suture (Shalon, Brazil).

Immediately after the surgical procedure, Tramadol (50mg/kg diluted in 500ml/water; EMS, Brazil) was administered for 3 days, followed by Paracetamol (200mg/kg diluted in 500ml/water), in drinking water, until the period of euthanasia. The animals were observed in the postoperative and postanesthetic period for 2 hours and, the next day, they returned to the inhalation routine of 10 cigarettes (Mustang, Philip Morris, Brazil), 3 times a day for 10 minutes, until the period of euthanasia.

Euthanasia of animals and processing of material

Fifteen and forty five days after the surgery, five animals from each group, per period, were euthanized. Barbiturate (Tiopental) was used in the dosage for rats (150 mg/kg) as follows: 2.5% intraperitoneal Sodium Thiopental applied in the lower left quadrant of the animal (associated with local anesthetic, lidocaine hydrochloride at the dosage of 10 mg/kg; EMS, Brazil).

The bone pieces removed from the tibia were fixed in 10% buffered formalin during 24 hours, washed in running water for 12 hours, and decalcified in sodium citrate solution and formic acid (Merck, Brazil) in equal portions for 45 days. The decalcifying solution, which contained the pieces, was changed every 3 days. Then, the pieces underwent the routine laboratory process for inclusion in paraffin.

After the blocks were obtained, longitudinal slices with a thickness of 6 micrometers were acquired on a rotating microtome (Leica RM 2245, Germany), resulting in semi-seriated cuts that were submitted to staining by hematoxylin and eosin for histomorphological and histomorphometric study under light microscopy and photographed in a photomicroscope (Olympus DP 71, Japan).

In the 15-day period, the ruptured cortical reconstitution was observed, but noticeably thinner and less organized than in the 45-day period. The site of surgical defect presented a reorganization of the medullar region in the two analyzed periods (Figure 1).

In the 2 analyzed periods (15 and 45 days) it was observed that the cortical was reconstructed and embracing particles of the biomaterial (GenOx). The site of the defect showed evident presence of the grafted biomaterial and the visualization of the area undergoing tissue reorganization.

In the slides, the presence of new bone tissue around the biomaterial particles can be observed (Figure 2).

It was observed that, relatively to the percentage of bone tissue in formation, according to the analyzed periods, there was a significant difference between the periods (15 and 45 days) (Figure 3 and Table 1).

It was observed that, relatively to the percentage of bone tissue in formation, according to the analyzed periods, a significant difference occurred between the periods (15 and 45 days) (Figure 4 and Table 2). 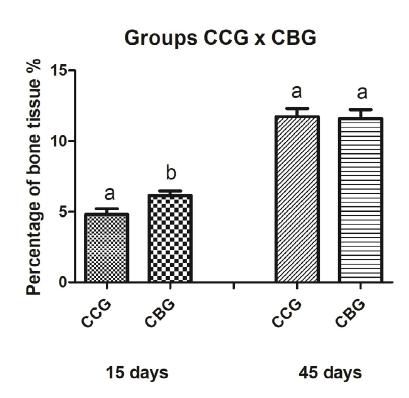 The present study aimed to analyze whether a demineralized bovine bone matrix changes the bone neoformation in rats submitted to inhalation of cigarette smoke (considering that these matrices are potentially osteoinductive), using histomorphological and histomorphometric analysis. It was observed that the grafted biomaterial assisted in the process of reconstitution of the injured bone in the initial period of recovery.

Exposure of the animal to nicotine can be accomplished in a number of ways, varying both in times of exposure as well as in the passive inhalation device2121 Brito MV, Yasojima EY, Silveira EL, Yamaki VN, Teixeira RK, Feijó DH, Gonçalves TB. New experimental model of exposure to environmental tobacco smoke. Acta Cir Bras. 2013 Dec;28(12):815-9. PMID: 24316853.. In this experiment, the option was made to use the method proposed by Cendon et al.2222 Cendon SP, Battlehner C, Lorenzi Filho G, Dohlnikoff M, Pereira PM, Conceição GM, Beppu OS, Saldiva PH. Pulmonary emphysema induced by passive smoking: an experimental study in rats. Braz J Med Biol Res. 1997 Oct;30(10):1241-7. PMID: 9496445. because, due to its simplicity, low cost and short duration, this technique proved to be a useful model for experiments in the area and animal model used.

In the histomorphometric analysis it was observed that, in the Cigarette Clot Group (CCG), there was a significant difference of new bone tissue formed in the analyzed periods (15 and 45 days), and in 15 days, there was 4.8 ± 0.42 of bone formation and 11.73 ± 0.59 (p <0.05) in 45 days. In the Cigarette Biomaterial Group (CBG) there were also significant differences between periods of 15 to 45 days, being respectively 6.16 ± 0.30 and 11.60 ± 0.61 (p <0.05). However, when the groups were compared, within the same periods analyzed, it was noted that bone neoformation was statistically significant only in the 15-day period, being higher in the CBG.

The graft with the biomaterial used in this study promoted osteoconduction which, in turn, refers to the ability of a surface to be favorable to adequate bone growth, usually through pores, channels or tubes. The biomaterial allows the recruitment and stimulation of pluripotent and undifferentiated cells into the form of bone-forming cells, such as pre-osteoblasts, osteoblasts, and ultimately osteocytes2929 Langhans MT, Yu S, Tuan RS. Stem cells in skeletal tissue engineering: technologies and models. Curr Stem Cell Res Ther. 2016;11(6):453-74. PMID: 26423296..

Future perspectives in this same line of research are evident in the range of biomaterials commercially produced worldwide that require detailed analysis in scientific research. In addition, the use of complementary therapies such as the low-level laser can help reduce physiological and functional recovery time by means of the photobiomodulatory effects that produce in the tissue in which it is applied3030 de Oliveira Gonçalves JB, Buchaim DV, de Souza Bueno CR, Pomini KT, Barraviera B, Júnior RSF, Andreo JC, de Castro Rodrigues A, Cestari TM, Buchaim RL. Effects of low-level laser therapy on autogenous bone graft stabilized with a new heterologous fibrin sealant. J Photochem Photobiol B. 2016 Sep;162:663-8. doi: 10.1016/j.jphotobiol.2016.07.023.
https://doi.org/10.1016/j.jphotobiol.201...

The implanted bone matrix improved the process of reconstitution of the injured bone tissue in rats submitted to passive inhalation of cigarette smoke, mainly in the initial period of repair.

Table 1   Table with the values obtained from the percentage of new bone tissue (mean ± standard deviation) in the CCG (Clot) in the analyzed periods (15 and 45 days).

Table 2   Table with values obtained from the percentage of new bone tissue (mean ± standard deviation) of the CBG (Biomaterial) in the analyzed periods (15 and 45 days).

Table 3   Comparison table with the values of new bone tissue percentage (mean ± standard deviation) between the CCG (Clot) with the CBG (Biomaterial) in the analyzed periods (15 and 45 days).