Large image archives formed by satellite remote sensing missions are getting an increasing valuable source of information in Geographic Information Systems (GIS). The need for retrieving a required image from a huge image database is increasing significantly for the purpose of analyzing resources in GIS. Content Based Geographic Image Retrieval (CBGIR) in the image processing field is the best solution to meet the requirement. In this work, we used Local Vector Pattern (LVP) to extract fine features present in the geographical image and retrieve the applicable images from a large remote sensing image database. The primary idea of our method is generating micro patterns of LVP by the vectors of each pixel that are constructed by calculating the values between the centre pixels and its neighbourhood pixels with various distances of different directions. Then the proposed method was designed for concatenating these vector patterns to produce more unique features of geographical images and comparing the results with Local Binary Pattern (LBP), Local Derivative Pattern (LDP) and Local Tetra Pattern (LTrP). Ultimately, the extensive analysis carried out on different geographical image collections proved that the proposed method achieves the improved classification accuracy and better retrieving results.

Accumulating information, from geographical images is a very prominent research work in the field of geosciences to know the climate change and natural disasters. Since the development of Geographic Information System (GIS) is increasing fast, it is needed to propose effective and exact methods for retrieving the remote sensing images. The fast and intelligent ways of Remote Sensing (RS) image acquisition increases the quantity of obtainable data exponentially and slowly approaching the zettabyte (which is equal to a billion terabyte) scale. As an example, a single in-orbit Synthetic Aperture Radar (SAR) sensor accumulates about 10-100 Gbytes of data per day, 10 Tbytes of data per year2222 Veganzones MA, Maldonado JO, Graña M. On Content-Based Image Retrieval Systems for Hyperspectral Remote Sensing Images. In: Graña M, Duro RJ, editor. Computational Intelligence for Remote Sensing. Springer-Verlag Berlin Heidelberg; 2008. p. 125-144.. Processing these geographical images manually is an extremely time consuming and tedious task. Content Based Image Retrieval (CBIR) is a technology that effectively manages image understanding and machine learning. The conventional CBIR depends on difficult and prolonged methods to extract features from a general image. In this study, we focus on the use of texture data; description of image content to produce an advanced and effective geographic image retrieval system. This process is named as Content Based Geographic Image Retrieval (CBGIR). CBGIR technique has been effectively used to retrieve applicable images on account of automatically derived features present in the geographical images. Since researchers of remote sensing field have started to recognize the effectiveness of local feature-based analysis of high-resolution images, in this paper, Local Vector Pattern (LVP) is applied to compute the features from geographical image.

The overview of the paper is as follows. Section 1 presents a short introduction about CBGIR and concise review of local patterns. Section 2 depicts the methods used in this paper. Section 3 illustrates the extensive analysis which is conducted on geographic image databases along with results and discussion. Section 4 draws the conclusion with the findings and proposal for the future work.

The proposed system overview is presented in figure 1. The steps followed in this work are given below.

Figure 1
Overview of the system.

The processes shown in figure 1 are discussed in following section.

The given images are pre-processed at prior to computation to enhance fine details in images. Resizing, removing unwanted noise, and removing reflections are done in this step. Median filter is used to perform the filtering operation. The median is the value of the center pixel of a rank-ordered distribution, encompassed by the filter. Since median filter has an ability to remove salt and pepper noise, it is more suitable for geographic images.

The objective of feature extraction is to extract fine details that can unambiguously distinguish the different types of textures present in an image. In this work, we extracted the features using Local Vector Pattern (LVP). The LVP descriptor was developed to provide various 2-D spatial structures of micro patterns with various pair-wise directions of vector of the referenced pixel and its neighborhood55 Fan KC, Hung TY. A Novel Local Pattern Descriptor - Local Vector Pattern in High-Order Derivative Space for Face Recognition. IEEE Trans. Image Process. 2014; 23(7): 2877-2891.. Consider a local sub-region R, Pc denotes the center pixel in R, I be the index angle of the variation direction, and D be the distance between the referenced pixel and its neighbourhood pixels along the I direction. The distance D = 1, 2 and 3 are taken into consideration. The direction value of a vector at the referenced pixel Pc can be deﬁned as

Where VI,D(Pc) is the direction value of a vector. When D = 1, the vector can be considered as the ﬁrst-order derivative values of LDP and LTrP. When D > 1, the implicit characteristics of 1D direction information can be acquired. The LVPK,L,I(Pc) , in I direction of vector at Pc is encoded as

Finally, the LVPK,L(Pc) , at referenced pixel Pc is deﬁned as the concatenation of the four 8-bit binary patterns LVPs.

In order to extract more discriminative 2D spatial structures of micro-patterns, the proposed local pattern descriptor encodes the LVPs by using the four pair-wise directions of vector of the referenced pixel and its neighborhood. Especially, each pair-wise direction of vector of the referenced pixel generates the transform ratio which is used to design the weight vector of dynamic linear decision function for encoding the distinct 8-bit binary pattern of each LVP. The LVPs are concatenated to form as a 32(4 × 8)-bit binary pattern for each referenced pixel in the local sub-region.

The image retrieval process is done with respect to the knowledge obtained from the SM step. Let’s consider Q to be a query image and I to be an image in a database. The closeness of Q and I are measured by computing the distance between their feature vectors in the SM step. The feature vector for the query image Q represented as VQ = {VQ1 , VQ2 ,… VQm } is obtained from feature extraction. Likewise, each image in the database is represented by the feature vector, VDB = {VDBk1 , VDBk2 ,…, VDBkn }, Where k = 1, 2,…, ǀDBǀ. The goal is to select R, the best images that resemble the query image by measuring the distance between the query image and the images in the databases ǀDBǀ. We used Canberra metric to compute the similarity distance metric. The Canberra distance d1 between vectors VQ and VDB in n-dimensional real vector space is given as follows:

The retrieved images are ranked as follows: For each of the query images Qz , 1 ≤ z ≤ q, a set of retrieval results within a cut-off number is formed. Let RQz = R1, R2,…, Rp stand for the set of images retrieved for the query image Qz. Where p is the number of images present in the retrieval set and q is the number of queries. The number of times an image appears on the retrieval sets is computed and hence the images are rearranged. The image appearing in all the sets attains a higher position and is displayed to the user while images with less number of appearances will have lower positions.

Totally one hundred bridge overpass, cyclone, beach and high density residential area images were collected. They were resized into 256 × 256 pixel images. Then those images were organized into four databases with twenty five images in each database. The four databases were named into DB1, DB2, DB3 and DB4 respectively. Figure 2 shows the example, satellite images that are collected. 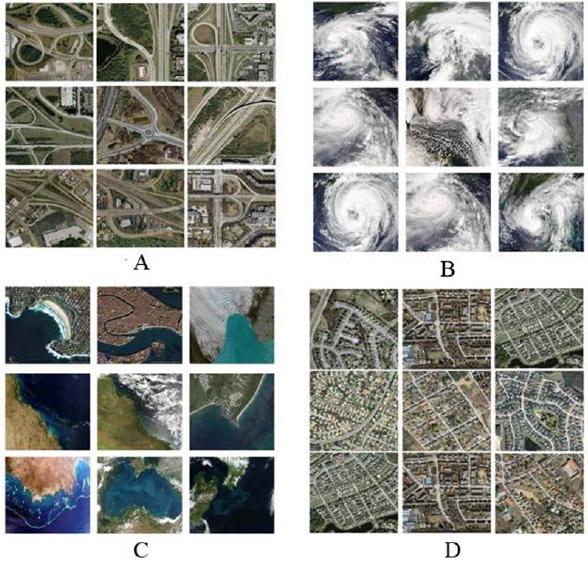 Figure 2
Four different types of Land use classes such as bridge overpass, cyclones, beach and high density residential area images were collected and named as DB1, DB2, DB3, and DB4. Nine samples from each class are shown in Fig. 2 A, B, C and D.

The proposed CBGIR system has two modules namely training and testing modules. In training module, first, all the images were pre-processed by converting them from RGB to grayscale images. The noises were removed using median filter. Feature extraction using LVP was done and the histograms were stored as feature vectors. In testing module, all the above noted processes were repeated on a given query image. Finally, the similarity measurement was calculated between the reference feature vectors that were stored during the training process and the feature vector obtained from the query image. The relevant images that have the minimum or null distance difference were ranked and displayed to the user. These processes are implemented in MATLAB software and executed successfully.

Validation of this analysis was done in all the four databases randomly 10 times for different techniques and the results were compared. The relevant cyclone images retrieved from the database (DB2) after applying the proposed system are shown in figure 3.

Figure 4 shows the comparison of the proposed method with an average retrieval rate of LBP, LDP and LTrP methods for a given query of cyclone image. It was observed from the results that LVP extracts the most relevant images with higher the degree of relevance.

Figure 4
Comparison of proposed method with other existing methods on cyclone database in terms of ARR.
Thumbnail
Table 1
Performance of various methods in terms of ARP on all databases

The results are considered to be far better and findings are as follows: In Table 1, the average retrieval precision values of LVP are greater than LBP, LDP and LTrP methods. The obtained high precision value means that more relevant images are retrieved in our unique proposed method.

In this paper, we have proved that content based geographical image retrieval can be performed using LVP. A novel approach referred as LVPs for CBGIR is successfully implemented and the performances of a local pattern descriptor are compared with the existing feature extracting techniques of LBP, LDP and LTrP. Ultimately, it is concluded that the proposed method LVP has produced better retrieval performance than the other three techniques of LBP, LDP and LTrP. It is expected that this work might jump-start a new way of research in geographical computer vision. Results can be further improved by combining local patterns with fuzzy logic methods for retrieving geographical images in the future with faster and perfect image matching, searching and retrieval system.

Thumbnail
Figure 1
Overview of the system.

Thumbnail
Figure 2
Four different types of Land use classes such as bridge overpass, cyclones, beach and high density residential area images were collected and named as DB1, DB2, DB3, and DB4. Nine samples from each class are shown in Fig. 2 A, B, C and D.

Thumbnail
Figure 4
Comparison of proposed method with other existing methods on cyclone database in terms of ARR.
Thumbnail
Table 1
Performance of various methods in terms of ARP on all databases

Figure 1   Overview of the system.

Figure 2   Four different types of Land use classes such as bridge overpass, cyclones, beach and high density residential area images were collected and named as DB1, DB2, DB3, and DB4. Nine samples from each class are shown in Fig. 2 A, B, C and D.

Figure 4   Comparison of proposed method with other existing methods on cyclone database in terms of ARR.