Lizards rarely visit and pollinate flowers, the few recent records being mostly restricted to island habitats. We report here on the Noronha skink (Euprepis atlanticus) seeking nectar in the flowers of the leguminous mulungu tree (Erythrina velutina) at Fernando de Noronha Archipelago, off northeast Brazil. The mulungu tree blooms during the dry season, and each flower secretes copious and diluted nectar throughout the day. The Noronha skink climbs up to the inflorescences and laps the nectar accumulated in the flowers' base. While exploiting the flowers and crawling over the inflorescences, the body parts of the skink contact the anthers and stigmas and pollen adheres to the lizard's scales. The lizard visits inflorescences from the same and different trees, which renders it a potential pollinator. As the mulungu tree blooms during the dry season and the island has little or no natural freshwater supply during drought periods, we suggest that the Noronha skink seeks flower nectar both for its energetic, diluted sugars and the water content.

Lizards rarely visit and pollinate flowers, the few recent records being mostly restricted to island habitats. We report here on the Noronha skink (Euprepis atlanticus) seeking nectar in the flowers of the leguminous mulungu tree (Erythrina velutina) at Fernando de Noronha Archipelago, off northeast Brazil. The mulungu tree blooms during the dry season, and each flower secretes copious and diluted nectar throughout the day. The Noronha skink climbs up to the inflorescences and laps the nectar accumulated in the flowers' base. While exploiting the flowers and crawling over the inflorescences, the body parts of the skink contact the anthers and stigmas and pollen adheres to the lizard's scales. The lizard visits inflorescences from the same and different trees, which renders it a potential pollinator. As the mulungu tree blooms during the dry season and the island has little or no natural freshwater supply during drought periods, we suggest that the Noronha skink seeks flower nectar both for its energetic, diluted sugars and the water content.

Lizards are among the least expected vertebrate pollinators and we can hardly speak of saurophily a syndrome that would encompass flower features suited to pollination by reptiles or coevolved systems (but see Olsson et al. 2000). Nevertheless, there are several recent records of lizards that visit and supposedly or actually pollinate flowers, including species of Gekkonidae, Lacertidae, Polychrotidae, Scincidae, and Teiidae (e.g., Dearing 1993, Eifler 1995, Elvers 1977, Font & Ferrer 1995, Pérez-Mellado & Casas 1997, Perry & Lazell 1997, Traveset & Sáez 1997, Nyhagen et al. 2001, Olesen & Valido 2003). Most if not all records of flower-visiting lizards are in islands, ranging in size from the Nitge islet in the Mediterranean (Pérez-Mellado & Casas 1997) to Tasmania in the Pacific (Olsson et al. 2000). A recent review (Olesen & Valido 2003) stresses that lizard pollination is an island phenomenon. Not surprisingly lizards seek nectar mostly on inflorescences an arrangement well suited for a climbing visitor (see Westerkamp 1990 for a discussion on flowers visited by perching and hovering birds).

The Noronha skink Euprepis atlanticus (= Mabuya atlantica), a lizard endemic to Fernando de Noronha Archipelago in SW Atlantic (Mausfeld et al. 2002), attains up to 25 cm in total length, forages mostly on the ground and thrives on anything edible from human leftovers to its own eggs (Silva-Jr. et al. 2005). This 'little dragon' is even able to tear apart pieces from larger animals' corpses (birds and fishes, IS pers. obs.). We report here on the Noronha skink's visits to flowers of the leguminous mulungu tree Erythrina velutina (Fabaceae) which blooms during the dry season. As the island has little or no natural freshwater supply during this period, we suggest that the skink takes the nectar both for its energetic sugars and the water content.

Field observations were conducted at several sites from the sea level to about 50 m a.s.l. on the main island of Fernando de Noronha Archipelago (03º50'S, 32º15'W), off northeast Brazil (see Carleton & Olson 1999 for map and description). The visits of the skinks to mulungu tree flowers were recorded and documented in October 2002 and 2004, and November 2003. We observed the lizards in a total of seven individual trees 3-18 m tall. During observational sessions of 20-50 min (totalling 11 h) we used 'focal animal' sampling in which all occurrences of specified actions were recorded (Altmann 1974). Besides written records, behaviour of the lizards on flowers was photographed and video-recorded, a voucher tape being on file at the Museu de História Natural, Universidade Estadual de Campinas (ZUEC tape # 20). Three free-ranging skink individuals were caught, examined for pollen placement on their body, and released. Two individuals were maintained over a day in a wooden box along with two large, fresh inflorescences of the mulungu tree, to examine pollen placement on their body after visits to the flowers. We recorded flower biology features including time and period of anthesis (see Faegri & van der Pijl 1980), receptivity of stigmas being tested with H202catalase activity (Zeisler 1938). Nectar concentration and volume were taken in early morning from 22 flowers bagged in previous late afternoon, and measured with a portable refractometer and a microlitre syringe respectively.

The Noronha skink (Euprepis atlanticus) climbed up to about 12 m to reach the flowers of the mulungu tree (Erythrina velutina), and visited the plants throughout the day. On reaching an inflorescence, the skink inserted its head into a flower and lapped the nectar accumulated at the flower's base. The exploitation of a given flower was done in 2-4 lapping bouts, each of them lasting 3-5 sec. Each open flower in an inflorescence was examined and probed for nectar. While seeking for nectar the Noronha skink crawled over the inflorescences and its body parts (head, back, belly, limbs) contacted the anthers and stigma (Fig. 1). Visits to each inflorescence lasted 40-201 sec (mean= 77.33, SD±50.75, N= 12), this variation partly due to flower number (e.g., one skink stayed on an inflorescence with seven flowers for 155 sec). However, the skinks lingered on the inflorescences between the nectar-lapping bouts, and also on the branches between visits to different inflorescences (probably a thermoregulatory behaviour), which added to visitation period variation. The skinks moved from flower to flower on the same inflorescence, from one inflorescence to another, and between neighbour trees. One closely followed skink visited three small trees (height 2-3 m) in a row. Two to three skinks exploited the same tree at the same time (Fig. 2), the larger individuals chasing and/or dislodging the smaller ones from an inflorescence or a flower-bearing branch. Between nectar-drinking bouts, the skinks foraged on the ground for insects and other foods. After a day in the box along with the inflorescences, the two skinks had patches of pollen over their body (mostly on belly and chin), and there was pollen adhered on the flowers' stigmas.

The flowers were additionally visited by all three terrestrial bird species native to Fernando de Noronha Archipelago: the dove Zenaida auriculata noronha and two perching birds, the flycatcher Elaenia ridleyana and the vireo Vireo gracilirostris. In addition to flower visiting, we recorded the flycatcher foraging on the fruits of cultivated papaya trees.

The mulungu tree blooms from August to November (J. M. Silva-Jr. pers. comm.), the dry season at Fernando de Noronha Archipelago. The trees dwell at several sites of the archipelago and the yellowish orange colours of their blooming form tinged patches on the rocky habitat (Fig. 3). The inflorescences may bear up to 26 flowers, with 2-8 newly-open ones per day (mean= 4.23, SD±1.81, N= 26). Nectar is diluted (10.5-13%), copious (Fig. 4), and available on flower opening. A single flower may accumulate up to 106 µl of nectar in 55 min. Each flower produces nectar continuously for one day, although its stigma remains receptive for two days. The yellow pollen (Fig. 4) adheres easily even to smooth and dry surfaces such as the Noronha skink scales.

The nectar-seeking behaviour of the Noronha skink is similar to that recorded for other flower-visiting lizards, except for the skinks climbing on trees, not shrubs and herbs as recorded in most studies on nectar seeking lizards (e.g., Eifler 1995, Elvers 1977, Font & Ferrer 1995, Perry & Lazell 1997, Traveset & Sáez 1997, but see Nyhagen et al. 2002 for Phelsuma geckos). Tree climbing for the Noronha skink would not be surprising, however, since several skink species are arboreal (Pianka & Vitt 2003), and in spite of its predominantly ground-dwelling habits Euprepis atlanticus is a skilled climber (IS pers. obs.). Moreover, the little dragon of Noronha is a very versatile and opportunistic forager (Silva-Jr et al. 2005), and food resources on islands may be scarce for lizards (e.g., Pérez-Mellado & Casas 1997, Olesen & Valido 2003).

Although we did not examine closely the pollinating role (see Pérez-Mellado & Casas 1997, Traveset & Sáez 1997) of E. atlanticus, the pollen stuck on its scales throughout its wandering between the flowers and its bodily contact with the flowers' anthers and stigmas favours the view that the skink is a pollinating agent of Erythrina velutina. As the skinks visited neighbour trees, their activity likely favours cross-pollination and enhances the genetic variability (Webb & Bawa 1983) of the mulungu tree.

Erythrina velutina produces nectar much less concentrated and in much larger amounts than two other species within the genus studied in Brazil. For E. speciosa the concentration is about 38% and the volume is about 15µl (Buzato et al. 2000), and for E. dominguezii these values are about 20% and 65µl (Ragusa-Netto 2002). Blooming at the dry season is a trend for species of Erythrina in Brazil (Lorenzi 1992, Buzato et al. 2000, Ragusa-Netto 2002), but in the island habitat of Fernando de Noronha Archipelago, with little or no natural freshwater supply during drought, this trend seems much providential (see below). The importance of E. dominguezii nectar as food supply for birds during the fruit-short dry season was commented upon by Ragusa-Netto (2002).

Since the Noronha skink is not too much pressed by lack of food, as it is able to capitalize on almost anything edible (Silva-Jr et al. 2005, our pers. obs.), the diluted mulungu nectar may be regarded as a bonus in its daily feeding schedule. On islands, lizards tend to reach high population density and experience low predation risk, and thus may expand their diet to include nectar, pollen, and fruits (Olesen & Valido 2003). At Fernando de Noronha Archipelago, Euprepis atlanticus has high population densities and is preyed on by introduced vertebrates only (Silva-Jr. et al. 2005), which lends support to the above mentioned view (Olesen & Valido 2003). An additional support to our assumption that the Noronha skink visits flowers for both sugars and water may be the fact that most if not all instances of flower-visiting and nectar-lapping lizards are recorded from oceanic islands (Olesen & Valido 2003), mainly in relatively arid environments (e.g., Eifler 1995, Elvers 1977, Font & Ferrer 1995, Pérez-Mellado & Casas 1997, Perry & Lazell 1997, Traveset & Sáez 1997). The midsummer diet of the lacertid Podarcis lilfordi on Nitge islet is composed mostly of nectar (Pérez-Mellado & Casas 1997), a further support to our view that versatile, insular lizards may be seeking flowers for water supply besides sugars.

Taken together, the Noronha skinks' day-round flower visitation, the mulungu trees blooming during the dry season, the large amount of diluted nectar, and the lack or scarcity of natural freshwater sources on the island, strongly indicate that the skinks seek nectar both for sugar and water intake. Even for lizards that dwell in xeric environments water intake is done by active drinking (Zug et al. 2001, Pianka & Vitt 2003), and we may add dilute nectar intake for water balance as well (present paper). We strongly suspect that lizards' visits to flowers serve a dual purpose: energy acquisition (Olesen & Valido 2003) and water balance, although this latter role of nectar in the physiology of flower-visiting lizards remains open to investigation.

We thank J. M. Silva-Jr. (Centro Golfinho Rotador) for a constant and friendly helping hand; M.A. Silva (Ibama) for the warm reception and permission to study vertebrates at the Marine National Park of Fernando de Noronha; the FAEP-Unicamp, and FAPESP for essential financial support. The authors are recipients of scholarships from the CNPq-Brasil. Two anonymous referees improved the paper. 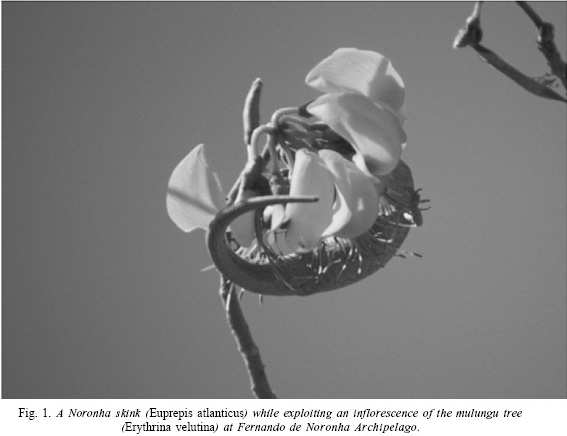 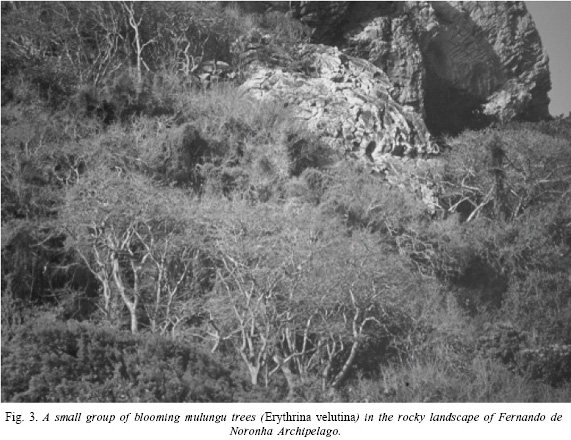