Association between halitosis and mouth breathing in children

OBJECTIVE: To determine whether there is a correlation between halitosis and mouth breathing in children.

STUDY DESIGN: Fifty-five children between 3 and 14 years of age were divided into two groups (nasal and mouth breathing) for the assessment of halitosis. A descriptive analysis was conducted on the degree of halitosis in each group. The chi-square test was used for comparison between groups, with a 5% level of significance.

CONCLUSIONS: The occurrence of halitosis was high among the children evaluated, and there was a statistically significant association between halitosis and mouth breathing.

Halitosis, or bad breath, is a condition in which the halitus is altered in a manner unpleasant for both the affected individual and those with whom he/she interacts. This phenomenon may be caused by a number of factors and may or may not be a pathological condition.1,2 This condition is also known as fetid halitus, mouth odor, bad breath and bad mouth odor.3,4 The odor may be a significant social and psychological disadvantage for affected individuals.5 Halitosis is a common complaint of both genders. It occurs worldwide and has a multifactorial etiology, but its main cause is the decomposition of organic matter caused by proteolytic anaerobic bacteria in the oral cavity.6,7

Generically, halitosis is classified as either primary or secondary. Primary halitosis refers to respiration exhaled by the lungs, whereas secondary halitosis originates either in the mouth or upper airways. Oral secondary halitosis results from the decomposition of organic matter that originates from flakes of epithelial cells retained on the posterior portion of the dorsum of the tongue. This decomposition is facilitated by mucin precipitation, a reduction in salivary flow and/or water imbalance, microbial attack and alkalization of the oral environment, all of which favor the growth of proteolytic bacteria and consequently result in the production of volatile sulfur compounds.8-10 The intensity of bad breath is significantly associated with the level of volatile sulfur compounds in the oral cavity5. While halitosis may have physiological and/or pathological causes, the main cause is related to conditions in the oral cavity.11

From a biological standpoint, saliva performs essential roles. These roles include enzymatic digestion, antimicrobial action, regulation of pH, protection of oral tissues, lubrication, assistance in swallowing, potentiation of taste, elimination of the food bolus and facilitation of the removal of carbon.12 The normal salivary pH is generally 6.5. This slightly acidic pH suppresses the growth and proliferation of Gram-negative and anaerobic bacteria, hindering the activation of the enzymes necessary for the putrefaction of amino acids, the end products of which smell bad because the compounds contain reduced sulfur (SH2).13 According to the literature, 50 to 60% of the population suffers from chronic halitosis, which can have consequences for both professional and personal life; 85% of cases of halitosis are of stomatognathic origin.14,15 Among the 50 to 65% of the population with halitosis, 8% of cases are associated with respiratory problems, and 90% are associated with oral problems.15 Saliva plays a central role in the development of bad breath, as it provides the protein substrate that is readily used by bacteria. Saliva is also an oxygen source for bacteria. A reduction in salivary flow has a negative effect on the self-cleaning of the mouth and can generate odoriferous volatile compounds.7-15 There are a number of clinical conditions that can cause changes to salivary patterns. One such condition is a change from nasal breathing to mouth breathing, which causes adaptive changes in the dental arches and surrounding tissues, such as anatomic alterations of the palate and surface drying of the mucosa.

Surface drying of the mucosa in mouth-breathing children may be related to halitosis, which is one of the complaints of mouth-breathing individuals, along with restless sleep, facial rictus when swallowing, reduced hearing, audible breathing, snoring, hyponasality, drooping shoulders, enlarged nostrils, sleepiness, a tired appearance, hypotonic lower lips, hypertonic upper lips and protrusion of the anterior teeth.16

The consequence of mouth breathing is an adaptation of the entire facial musculature, which causes changes in the dental arches and positioning of the teeth, leading to structural alterations in the face, including the lips, tongue, palate and mandible, as these structures adapt to the new breathing pattern.17

The aim of the present study was to determine whether there is a correlation between halitosis and mouth breathing in children.

This study was approved by the ethics committee of Universidade Metropolitana de Santos (process: CEP-UNIMES 029/2009). All children registered at the clinic that hosted a specialization course in pediatric dentistry in the ABCD/SP region in Sao Paulo in 2008 were included in the study.

Children were divided into two groups based on breathing pattern (nasal or mouth) for the evaluation of halitosis. Breathing pattern was determined by clinical evaluation and specific tests (the mirror test and the water-in-mouth test) and was confirmed by the evaluation of an otolaryngologist. Clinical evaluation determined the presence or absence of the following signs: long face, drooping eyes, thin upper lip, dry lips, hypotonic lips, inverted lower lip, narrow nostrils, high arched palate, inadequate lip seal and anterior open bite. The mirror test involved placing a two-sided mirror under the nostrils and observing the formation of vapor on the upper or lower part of the mirror (denoting either nasal or mouth breathing, respectively) or on both parts.18 The water-in-mouth test involved the child holding water in his/her mouth with the lips closed and without swallowing for three minutes. The lip commissure was observed for signs of effort; children who were unable to keep their lips closed over the three-minute period were considered mouth breathers.18

Oral halimetry was performed for the quantification of halitus and the differentiation of sources of odor using a portable Breath AlertTM device (Tanita Corporation, Japan) (Fig. 1).

The portable sulfite monitor was used following the manufacturer's instructions:

1. The device was reset by shaking it 4 to 5 times to eliminate any odor left over from previous use.

2. The button below the LCD was pressed, which produced a beep. The button was held until a second beep sounded, at which point the volunteer blew into the air input. After a third beep, the breath was assigned a number between 1 and 4 based on a graphic depiction of the different levels (Fig. 2):

When no number appeared, it was considered a reading error, and the procedure was repeated.

A descriptive analysis was performed for halitosis in each group, expressed as percentage, mean and standard deviation (SD). The chi-square test was used for comparisons between nasal- and mouth-breathing groups, with the level of significance set at 5%.

The assessment of halitosis in children is essential because it has the potential to cause social restriction and reduced quality of life and may indicate the presence of more serious medical conditions.

The literature describes methods for assessing bad breath, such as an enzyme analysis of the saliva and direct measurement of volatile sulfur compounds. These methods have considerable financial costs.11 The subjective halitosis detection test, also known as the organoleptic test, has limited use because it depends on the olfactory capacity of the examiner. Climatic conditions and emotional states that affect the sensitivity of the examiner may mask the presence of halitosis.11 In this study, a portable Breath AlertTM device (Tanita Corporation, Japan) was used to measure halitosis in children. This device is easy to use and facilitates the determination of halitosis, especially in children.

Among the children studied, 63% exhibited a strong odor characteristic of halitosis. This figure is higher than that described in a previous study involving children, which found that only 30% of the participants had halitosis.2 Foul odor occurs when anaerobic bacteria in the oral cavity break down the amino acids cystine, cysteine and methionine, converting them into volatile sulfur compounds.21 Saliva contains important antibacterial characteristics, such as secreted immunoglobulin A (IgA) and other specific types of glycoproteins that adhere to and eliminate bacteria; additionally, salivary peroxidase, lysozyme and lactoferrin affect bacterial metabolism. Any condition that alters these defense systems may make the host much more vulnerable to oral disease.22

There was a significant association between halitosis and mouth breathing in this study. Kara et al. found that more than 70% of children analyzed had morning halitosis caused by dry mouth from breathing through the mouth during sleep.5 It is likely that the oral cavity becomes dry because the mouth remains open the majority of the time, thereby causing halitosis. According to Weiler et al., there is no difference in salivary flow or the buffering capacity of saliva in nasal- and mouth-breathing patterns.24 Rather, the evaporation of the water in saliva among mouth breathers may explain the association between mouth breathing and halitosis found in this study.

We observed that a greater number of nasal breathers in proportion to mouth breathers had grade 1 and 2 halitosis, but the difference was not statistically significant. No chisquare test was applied because p<0.05.

The social impact of halitosis has encouraged a large number of studies. The condition is embarrassing for patients and makes them feel insecure in social and family settings, which reduces their quality of life. The condition is also embarrassing for those who interact with the affected individual.11 These facts underscore the importance of studies of the incidence of halitosis among children and the factors linked to the etiology of this oral problem.

The occurrence of halitosis among evaluated children was high, and there was a statistically significant association between halitosis and mouth breathing. There is a need for further studies on bad breath in children and the factors related to its etiology. 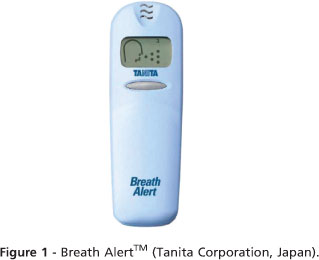 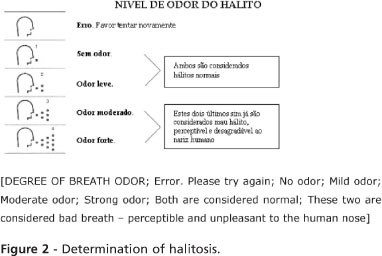