The presence of cutaneous metastases (CM) from a digestive tract cancer is infrequent, appearing in less than 5% of the cases. Given the low incidence of metastasis from colon adenocarcinoma, an unusual case that occurred in the Colorectal Surgery Department of Santa Casa de São Paulo is described in this report, and a brief review of literature is presented. A 78-year-old female patient who underwent right hemicolectomy, developed a tumor with approximately 8 cm in diameter in her gluteus eight months later, which was surgically resected, and the histological diagnosis was metastatic adenocarcinoma of the right colon. Although the literature estimated short survival in cases of CM, the patient developed no signs of tumor recurrence five months after the onset of metastasis in the gluteus, with significant improvement in her quality of life. 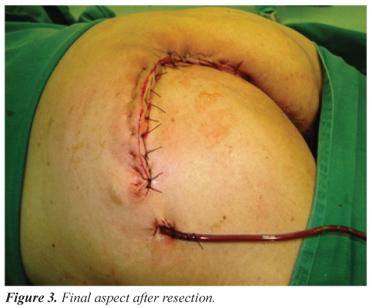