Thirty-four Leishmania isolates obtained from Costa Rican patients, from different geographical areas, were characterized by isoenzyme electrophoresis and indirect immunofluorescense with monoclonal antibodies. Thirty-two were characterized as L. panamensis strains and two were L. braziliensis variants. We confirm the evident predominance of L. panamensis as the main etiological agent of leishmaniasis in Costa Rica and the existence of L. braziliensis in the country.

Thirty-four Leishmania isolates obtained from Costa Rican patients, from different geographical areas, were characterized by isoenzyme electrophoresis and indirect immunofluorescense with monoclonal antibodies. Thirty-two were characterized as L. panamensis strains and two were L. braziliensis variants. We confirm the evident predominance of L. panamensis as the main etiological agent of leishmaniasis in Costa Rica and the existence of L. braziliensis in the country.

Human leishmaniasis is widespread throughout Central America and constitutes an important public health problem. Annual incidence is estimated to be about 20,000 cases (Carreira et al. 1995), of which 4,000 to 5,000 correspond to Costa Rica (Zeledón 1992). The disease exists under different clinical manifestations and in a variety of ecological and epidemiological patterns (Zeledón 1985) making it a complex problem that is difficult to manage.

The identity of the Leishmania species involved is a factor that largely determines the clinical manifestations of the disease (Lainson & Shaw 1987, Alexander & Russell 1992) and its response to treatment (Navin et al. 1992, Grogl et al. 1992). The World Health Organization (WHO 1990) recommends isoenzyme electrophoresis and the use of specific monoclonal antibodies as appropriate methods for characterizing Leishmania.

In Costa Rica, although it is known that L. panamensis species is the principal etiological agent of leishmaniasis (Zeledón 1992), there are no detailed and extensive taxonomic studies of the implicated parasites in different areas of the country. Here, we report the identification by isoenzyme electrophoresis and indirect immunofluorescence (IFA) with monoclonal antibodies of 34 Leishmania strains, isolated from different geographical and ecological areas of Costa Rica, from patients with cutaneous leishmaniasis.

Parasite isolation and cultivation - The primary isolation was made from patients with cutaneous lesions by inoculation of material obtained by needle aspiration in biphasic Senekjie's medium with Locke's solution (Tobie & Rees 1948). Promastigotes were expanded in enriched Schneider's Drosophila liquid medium (Gibco, Grand Island, NY) suplemented with 20% fetal bovine serum (FBS), and incubated at 27oC. All strains were stored in liquid nitrogen in Schneider' medium contanining 30% FBS and 7.5% dimethylsulfoxide.

Preparation of extracts for electrophoresis - Cultured Leishmania were harvested during exponential growth by centrifugation at 1,000 x g at 4oC for 10 min. The pellet was washed three times in phosphate buffered saline (PBS), pH 7.2 and resuspended in an equal volume of membrane buffer (14 parts distilled H2O: 1 part 0.1 M Tris/Maleic Acid/EDTA/MgCl2, pH 7.4). The material was stored at -70oC until use. For electrophoresis, the pellets were lysed by three cycles of freezing and thawing in liquid nitrogen.

Isoenzyme electrophoresis - Electrophoresis was carried out in cellulose acetate as described by Kreutzer and Christensen (1980) and Kreutzer et al. (1983).

Indirect immunofluorescence with monoclonal antibodies - The monoclonal antibodies, and their respective reactivity, used in this study are shown in Table II. Promastigotes, washed in PBS, pH 7.2 and standardized to a concentration of 1x106 parasites/ml, were air dried, in 10 ml volumes, on twelve well microscope slides. The slides were submerged in blocking solution (PBS, pH 7.2 + 5% FBS) during 15 min, washed with PBS, and air dried. Each well was covered with 10 ml of the monoclonal antibodies diluted in PBS (1:1000) for 30 min (McMahon-Pratt et al. 1984). The unreactive protein was removed by three washes in PBS and 10 ml/well of anti-mouse IgG labeled with fluorescein and diluted 1:50 was added. Incubation was continued for 30 min at room temperature, unreactive conjugate was removed by three washes in PBS and the slides were mounted with buffered glycerol and observed with a Olympus fluorescence microscope.

Isolation of strains - Thirty-four strains from a total of 104 patients with suspected cutaneous leishmaniasis from the main endemic areas of Costa Rica were isolated. The details of patients from whom isolates originated as well as the identification obtained by enzyme electrophoresis and monoclonal antibodies are presented in Table III.

Isoenzyme analysis - All of the 34 isolates showed isoenzyme patterns similar to members of the subgenus Viannia. Thirty of them had identical profile to L. panamensis (Table III, Fig. 1). Two strains (CCS3 and CBR3) showed slight variations in the migration of 6-PGDH, PGM, and MPI as compared with L. panamensis reference strain (Fig. 1). The two remaining isolates had a distinct profile from L. panamensis and were closer to L. braziliensis. One of them (CBR2) shared 25% of the alleles with L. braziliensis and the other (CHA9) shared 75%.

Previous studies on leishmaniasis in Costa Rica have revealed usefull information about the epidemiology of the disease. It is known that sloths, Bradypus griseus and Choloepus hoffmanni, are the main reservoirs of L. panamensis both in the Caribbean and Pacific basins (Zeledón et al. 1975). It also has been isolated from a specimen of the rodent Heteromys dermarestianus (Zeledón et al. 1977). Futhermore, L. panamensis has been isolated from the sandflies Lutzomyia ylephiletor and Lu. trapidoi (Zeledón & Alfaro 1973, Zeledón et al. 1977). Taxonomic studies of the parasite implicated have been limited to a few areas, confirming the predominance of L. panamensis (Zeledón 1992). Grimaldi et al. (1987) included five Costa Rican strains in a study of characterization with monoclonal antibodies and all were L. panamensis. In the present study, we confirm L. panamensis as the main etiological agent of cutaneous leishmaniasis in all the endemic areas of the country. We also found L. panamensis enzymatic variants and we confirm the existence of L. braziliensis enzymatic variants in two important foci of leishmaniasis in Costa Rica, one in the Pacific and another in the Caribbean side (Fig. 2). The presence of strains with some genetic (enzyme) polymorphism, suggests the existence of other local populations but, as stated by Kreutzer (1996), probably belonging to "a single reproductive population". The electrophoretic mobilities of our L. panamensis and L. braziliensis variants are different from the L. panamensis/L. braziliensis hybrid as characterized by Belli et al. (1994) in Nicaragua.

In Costa Rica, mucocutaneous leishmaniasis (MCL) occurs in 3 to 5% of the cases (Zeledón 1992) and three isolates obtained in cultures directly from the mucosal lesions by biopsy were identifyied by zymodemes as L. panamensis. The only other species of Leishmania recorded from Costa Rica is L. infantum from cutaneous lesions detected in an outbreak in the north-west part of the country (Zeledón et al. 1989). A previous report of L. mexicana from the same area originated from a mislabeled culture (Zeledón 1992).

To Dr Diane McMahon-Pratt for providing the monoclonal antibodies. To Mr Fernando Retana for technical assistance. To Dr Paul Hanson for revising the manuscript. To all the medical and laboratory personnel of the Costa Rican Health System who facilitated the obtention of the samples. 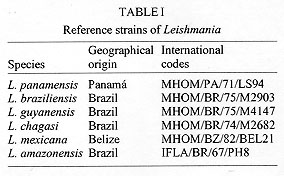