Origanum vulgare L., Lamiaceae, from six different production areas of China and Pakistan were analyzed via gas chromatography equipped with a flame ionization detector (GC-FID) and examined for their volatile constituents by gas chromatography-mass spectroscopy (GCMS). This procedure allowed the identification of 11 to 46 components among six production areas, representing 98.5% to 99.9% of the total oil extracted. The yields of the essential oil of the six production areas of O. vulgare ranged from 0.1 to 0.7%. The class of oxygenated monoterpenes was predominant in all the essential oils. However, samples S5 and S6 have high content of sesquiterpene hydrocarbons (33.7 and 43.7%); while sample S6 is high on oxygenated sesquiterpene (32.9%). The principal component analysis of O. vulgare was employed to provide a comprehensive evaluation of essential oil components. The cluster analysis of O. vulgare was classified into three subsets, characterized according to the major essential oil components. The current study investigated the composition differences of essential oil among six production areas offering foundation for quality control, resource optimization, and clinical treatments.

Origanum species from the Lamiaceae family, which is an important culinary herb in world trade, are widely distributed in the fields of China and some central Asian countries (Hudaberdi, 2004) and have been reported to be widely used as a traditional remedy to treat various ailments, such as whooping and convulsive coughs, digestive disorders, and menstrual problems (Ozbek et al., 2008). The essential oil of this plant has proven antimicrobial, fungicidal, and antioxidant properties (Lagouri et al., 1993; Busatta et al., 2007; Bouhdid et al., 2008;). The essential oil composition of Origanum spp. has been extensively investigated (Lawrence, 1984; Kokkini et al., 1997; Reverchon, 1997; Russo, 1998; Chalchat and Pasquier, 1998; D'Antuono et al., 2000), which had reported differences between the many species.

In the last decade, Origanum vulgare L., a member of the Lamiaceae family, has been a valuable source of natural products to maintain human health for a long period of time, and subjected to intensive analysis for natural therapies (Force et al., 2000). The dried herb and the essential oil of O. vulgare are used in medicine (Hummer et al., 1999). The aroma, flavor, and pharmaceutical properties of O. vulgare are products of its essential oil which consists mostly of monoterpenes and sesquiterpenes. O. vulgare can be used to prevent colds, treat acute gastroenteritis, abdominal pain, irregular menstruation, pruritus, and other diseases (Hudaberdi, 2004).

The differences in the essential oil composition among the different production areas may be due to the developmental stages or variations in cultivation conditions of the plant, or as a result of structural or physiological modification of the plant caused by specific environmental factors (phenotypic plasticity). Thus, composition differentiation requires a detailed analysis using gas chromatography-mass spectroscopy (GC-MS) and the application of principal component analysis. Composition analysis via GC-flame ionization detection (FID) and GC-MS of the eessential oil (Zhang et al., 2010; Ma et al., 2010; Zhou et al., 2011) has been previously reported.

Fresh samples (whole plant) of Origanum vulgare L., Lamiaceae, were collected during flowering phase in August 2011, from six different production areas in China and Pakistan. More than ten specimens per collection site were collected. Voucher specimens from each site were deposited in the Traditional Chinese Medicine Ethnic Herbs Museum (TCMEHM) of Xinjiang Medical University under the name O. vulgare. The samples were identified by Yonghe Li, chief apothecary of the Chinese medicine hospital of Xinjiang. Table 1 summarizes the information about the collection sites, voucher numbers, and essential oil yields (%, referred to dry plant material), obtained by hydro-distillation in a Clevenger-type apparatus for 6 h.

Dried undamaged O. vulgare whole plants (flowers, stems, and leaves) from the six different production areas (100 g each, n = 5) were submitted to hydro-distillation (Chu et al., 2011) in a Clevenger-type apparatus for 6 h. At the end of distillation, the oils were collected, dried with anhydrous sodium sulfate (Na2SO4) prior to analyses, measured, and transferred to glass flasks and stored at 4ºC.

The GC-MS analysis was carried out using an Agilent 6890 N GC-FID system, equipped with a flame ionization detector (FID) on an Agilent capillary column, HP-5 (30 m × 0.32 mm; film thickness 0.25 μm) (Agilent Technologies, America). The column temperature was programmed from 40ºC to 250ºC at a rate of 5ºC/min. The column temperatures of injector and detector were set at 250ºC. Helium was used as the carrier, in a flow rate 1.0 ml/min. Split ratio was 1:100. GC-MS analyses were done in the EI mode at 70 e\/, inlet temperature was 200ºC and transfer line temperature was 250ºC. The temperature program was the same with that of the GC analysis. The injected volume was 0.2 μl.

The identification of the components and peak identification were done by comparing their retention time with respect to the n-alkane series (C6-C22) internal standards under identical experimental conditions (Adams, 2001). The mass spectra and relative Retention Index (RI) were compared with those of the commercial NIST (National Institute of Standards and Technology, Gaithersburg, MD, USA) mass spectral library (NIST 05 and NIST 05 s). The relative amounts of the individual components were calculated based on the GC integrator peak areas without using correction factors.

Calculating the similarity degree via vector included angle cosine method, to obtain the diversity among the six different productions.

Cluster analysis is used to assign a set of objects into groups called clusters, so that the objects in the same cluster are more similar in one way or another to each other than those in other clusters. The cluster analysis was based on the data (select variables > 0.2 % of 42 essential oil components from six production areas).

The essential oil is extracted by hydro-distillation of the whole plant and analyzed via GC-FID and GC/MS, which allowed the identification of 11 to 46 components among the six different production areas studied, representing 98.5% to 99.9% of the total oil. The essential oil from Origanum vulgare L., Lamiaceae, collected from the six production areas of China: Kunlun Mountain of Hetian, Shangqiu of Henan, Hetian, Anhui, Yili, and Pakistan were obtained in yields ranging from 0.1% to 0.7 % (v/w).

Compared with other previous similar works reporting that β-sitosterol (I), dancosterol (II), and fifteen compounds were isolated from the chloroform fraction of O. vulgare,planted in Hubei (Sun et al., 2007); The other experiments showed some differences within the area variation, nevertheless all samples contained the same eight compounds: 3-octanone, myrcene, p-cymene, γ-terpinene, thymol, carvacrol, α-caryophyllene, caryophyllene oxide. Furthermore, the relative amounts of these eight compounds in all samples were above 70% (Zan et al., 2013).

According to the calculations of the similarity degree via vector included-angle cosine method, O. vulgare sample S1 is similar to samples S3 and S4, which indicated that the three samples (S1, S3, and S4) have little differences in composition (Table 4).

To explore the relationship between the samples from various regions and their relation to specific volatile compounds, the GC-MS data was subjected to PCA. This analysis was employed to provide an overview of the capacity to distinguish essential oil components based on GC-MS data (select variables > 0.2% of 42 essential oil components from six production areas). As a result, the rate of accumulation of the previous three major compounds reached 99.6% (> 85%), which were 80.3%, 13.3%, and 6.0%, respectively. The first main compound found had high yields of eucalyptol and eugenol methyl ether; the second major compound was rich in germacrene D and caryophyllene oxide; and the third major element was rich in thymol.

The scree plot graph (Fig. 1), a plot of eigenvalue as a foundation of the eigenvalue number, was used to decide the number of principal components needed to be retained. The scree graph for the data (select variables > 0.2% of 42 essential oil components from six production areas) exhibited an ideal pattern, which has a relatively large disparity among the eigenvalue of factors 1, 2, and 3, hence, the three factors provided the most information. According to the principal component factor and weighted comprehensive scores, samples S2, S5, and S6 have better quality (Shanqiu of Henan, Abhui and Yili). 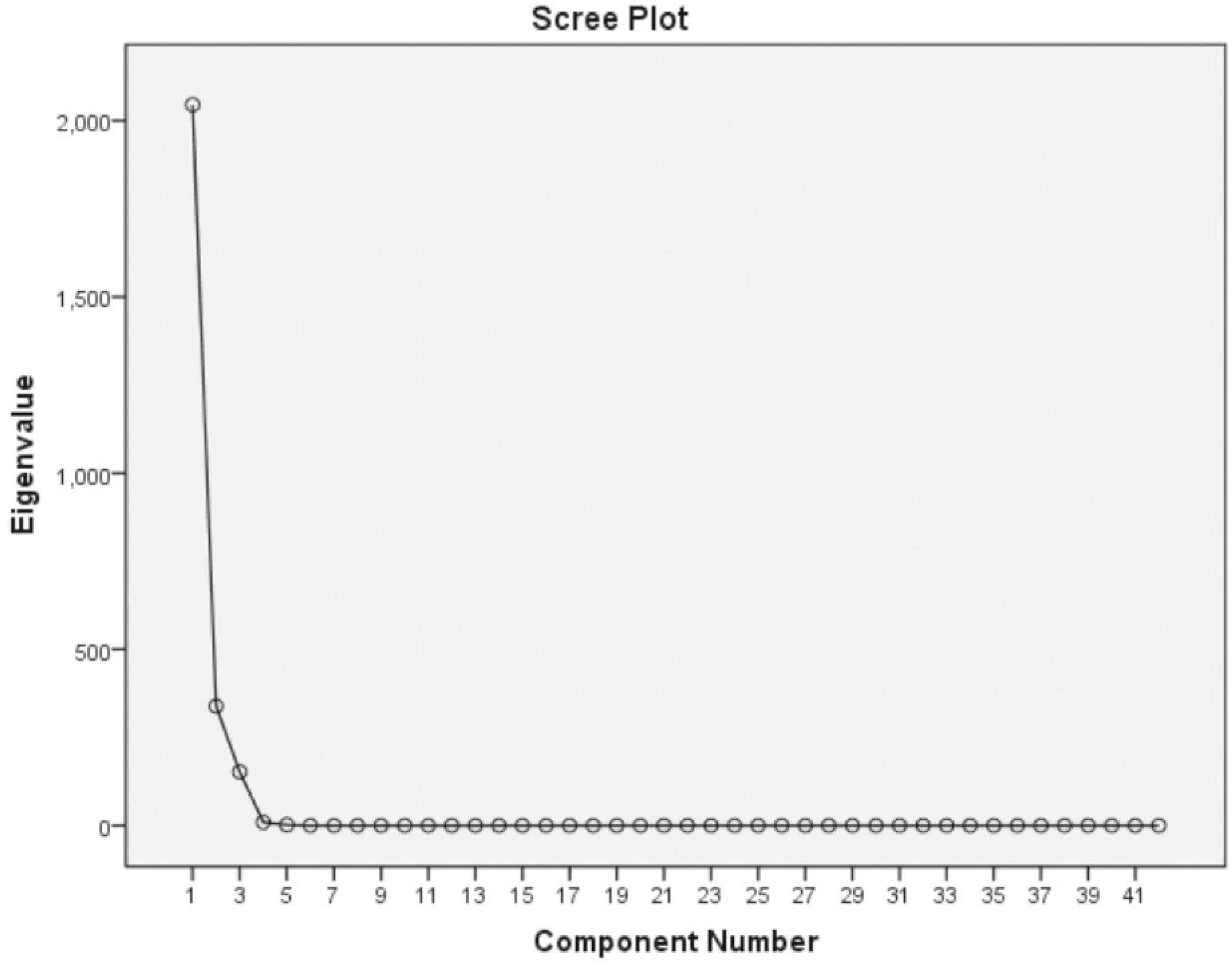 Cluster analysis, can classify the number of samples studied into a number of groups, according to the chemical composition of essential oil by 'magnifying' their similarities. Results obtained from the cluster analysis showed the existence of a high inter-production variability within the essential oil of O. vulgare From the six production-samples submitted to multivariate analysis, two well-defined groups of essential oil were differentiated by cluster analysis (Fig. 2). Based on the data, (select variables > 0.2% of 42 essential oil components from six production areas) two subclusters can be observed: the first subset contains three production sites of samples S1, S3, and S4 (Kunlun Mountain of Hetian, Pakistan, Hetian), the second subset includes samples S2 (Shangqiu of Henan), S5 (Anhui) and S6 (Yili).

This current study was the first to determine the essential oil composition to conduct similarity analysis, PCA, and cluster analysis of O. vulgare from the six different production areas in China and Pakistan. The main aim of the present study was to offer research basis.