O. bonariensis parasitism has been studied in many occasions under extensive conditions (FUSTER DE PLAZA; BOSCHI, 1957; BOSCHI; FUSTER DE PLAZA, 1959; ORTUBAY et al., 1994; GIL DE PERTIERRA; VIOZZI, 1999; GARCÍA ROMERO, 2001; MANCINI et al., 2000; MANCINI et al., 2005; MANCINI et al., 2006). Noneless, little is known about the seasonality variation of the parasitic infection. In view of this, the study we present was conducted to determine the seasonal variation of parasitism in O. bonariensis and assess the association between sample parasites prevalence and intensity with the body condition.

Between the years 1999 and 2002, the reservoir was sampled once per season using trawl nets and floatong gill nets.

Standard length (StL) with accuracy of 1 mm and total wet weight (W) with accuracy of 0.1 g were recorded in all caught fishes. Afterwards, the body condition (Wr) was deduced using the equation reported by Colautti et al. (2003). Water temperature (ºC) were measured simultaneously.

The caught fishes were examined by means of skin and gills scrapings, and were subject to digestive contents analysis. The p arasites collected were fixed and cleared according to Noga (1996) and Eiras et al. (2003). The nematodes and crustaceans taxonomic keys used were those suggested by Kabata (1979), Alvarez Pellitero (1988) and Pereira Bueno; Ferre Pérez (1997). Cestodes were identified following Gil de Pertierra and Viozzi (1999) guidelines.

The ecological parameters used to describe the parasitism were prevalence, mean intensity and density (mean number of parasites per unit of digestive content) as reported by Margolis et al. (1982).

The prevalence seasonal differences were tested using Chisquare and confidence intervals (ALTMAN et al., 2000). Seasonality on parasite intensity and density were evaluated by means of Kruskal Wallis test. Bivariate correlations between the parasite prevalence, water temperature, StL and Wr was examined by means of Spearman rank correlation test (SOKAL; ROHLF, 1969). The analysis was carried out using SPSS for Windows 10.0.

Except for the correlation between C. macdonaghi density vs. relative weight (rs = 0.76, P < 0.01) and water temperature (rs = -0.72, P < 0.01), none association was found between parasite ecological parameters and average Wr.

The wild fish parasite infection is a worldwide problem that can not be subject to eradication due to ecological factors beyond of human control (PEREIRA BUENO; FERREPÉREZ, 1997). For instance, Lernaea spp. has a wide range of host (PIASECKI et al., 2004), fact that makes difficult its control. This copepod, one of the most common parasites of wild and aquacultures fishes of the Argentina central region, and it produces serious economic losses to the fish industry. In this sense, Hepher and Pruginin (1991) claim that pejerrey susceptibility to Lernaea spp. infection has been the main obstacle for the production of O. bonariensis.

The life cycle of the genus Lernaea requires of temperatures above 15ºC, within an optimum range of 25 to 30 ºC (MARCOGLIESE, 1991). The highest prevalence and parasite intensities observed in summer were influenced greately by year 2002 sample. The parasite life cycle is favored by summer temperatures, as it has been reported in other species by Marcogliese (1991). In addition, the winter prevalences observed were lower than those reported for other lakes in the region (MANCINI; GROSMAN, 1998).

Copepods were preferentially located in the base of the dorsal and pectoral fins as well as in the mid-part of the fish body in consistency with other species (MEDEIROS; MALTCHIK, 1999). Williams and Williams (1995), reported that L. cyprinacea may seriously injure wild fishes and also can reduce growth rate. In contrast, we were not able to detect changes in body conditions according to different parasite burden, however, our findings should be interpreted with cautions, because we assessed the association by using correlation at group level.

The genus Contracaecum includes anisakid nematodes of worldwide distribution, however in this study the prevalence was very low, and even when the estimated prevalence reached to a maximum, the sample size was low (one out six). Like observations made in other fishes, the number of anisakids larvae increases, as pejerrey gets older (VALLES-RÍOS et al., 2000; MANCINI et al., 2005). That might be the reason why we have found a very low prevalence of anisakids in our study because of a great proportion of the caught fishes were less than 2 years old.

The presence of C. macdonaghi in O. hatcheri has been reported initially by Szidat and Nani (1951). Due to changes in taxonomy, this parasitosis could have been reported under different name in O. bonariensis (FUSTER DE PLAZA; BOSCHI, 1957; BOSCHI; FUSTER DE PLAZA, 1959; GIL DE PERTIERRA; VIOZZI, 1995; MANCINI; GROSMAN, 1998).

The high variability observed in the C. macdonaghi density is consistent with previous report (BOSCHI; FUSTER DE PLAZA, 1959). According to García Romero (2001), this parasite is not always capable of inducing important pathological changes in the intestinal epithelium. Therefore, the lack of association between body condition and C. macdonaghi burden, sounds biologically feasible. The positive correlation observed between parasite density and Wr may be indicative of a higher consumption of copepods, the intermediate host (HANZELOVA; GERDEAUX, 2003; PIASECKI et al., 2004). The zooplankton consumption rate (COLAUTTI et al., 2003) and gonadal maturity that happened by the end of winter, may have also implication on the pejerrey Wr.

The way water quality and eutrophication influence the prevalence and intensity of several fish parasites has been well characterized previously (MACKENZIE et al., 1995; SURES, 2004). The aquatic environment monitoring is very important because sudden changes may stress the fish population or increase the parasite vectors density in the water. Cause of that, the parasite burden is considered a proxy of the water quality (KADLEC et al., 2003). However, the current eutrophic conditions of La Viña reservoir (MANCINI et al., 2004) appeared to have exerted no influence on O. bonariensis parasite burden, which in fact was very low.

The reservoirs from the central area of Argentina have remarkable dynamism. Modifications in the ecosystem may drastically affect the transmission of parasites as a result of changes in the planktonic community structure (MARCOGLIESE, 1995). Such changes may explain, in part, the prevalence variation reported among aquatic ecosystems.

The parasite prevalences in O. bonariensis from La Viña reservoir was highly variable. Cangatiella macdonaghi was the most common parasite. The prevalence and intensity of Contracaecum spp. were very low, still it may represent a public health risk. Lernaea cyprinacea showed higher prevalence toward the end of the study and specially during the warm season. The intensities and densities of the parasite agents were not associated with fish body condition.

Acknowledgements:-This research was supported by the Secretaría de Ciencia y Técnica of the Universidad Nacional de Río Cuarto, Córdoba. We specially thank the APA II club authorities and personel for their assistance and Elena Fernández for her collaboration with the portugese translation. 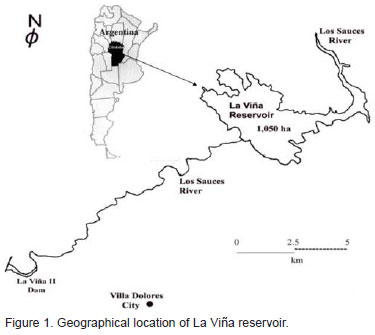 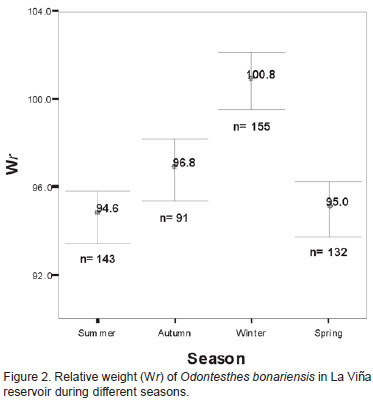 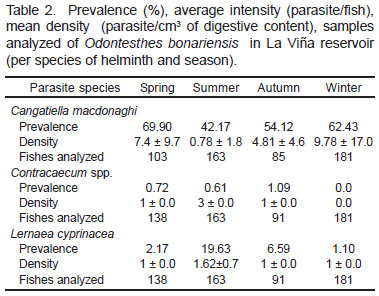