Wound healing under the effect of iodine cadexomer in rats

PURPOSE: To assess vthe action of iodine cadexomer in the healing process of surgical wounds in rats and if cytotoxicity occurs with the systemic absorption of iodine. METHODS: Thirty six Wistar rats were used and performed 53 wounds with surgical punch of 6 mm diameter on them. Two lesions were made diametrically opposed on groups with distilled water (GAD) and sodium chloride (GCS); on the right lesions were used bandage with distilled water and on the left ones dressing with sodium chloride. In cadexomer iodine (GCI) group, a punch injury was made only on the left side and the dressing was carried out with cadexomer iodine. The groups were divided in two sub-groups according to the day of death (7 and 14). Microscopically was used H&E staining, through which the inflammation could be observed and also the neovascularization. Staining with Masson trichrome studied fibrosis. TSH and free T4 were used for absorption recognition of iodine, and its toxic potential was performed before death with the animal anesthetized. RESULTS: Microscopic analysis showed more marked intensity of inflammation in group GAD, subgroup 14 days. Neovascularization showed be discrete in GCS sub-group 14 days. Fibrosis was more pronounced in the group GCI. Comparing the types of treatment, there was statistical significance between groups GCI and GCS (p<0.013). The TSH and T4, showed no difference between the control group and GCI in relation to the absorption of iodine. In evaluating the GCI and control groups, within each treatment, statistical significance was found between them (p<0.001) when compared the days of observation. CONCLUSION: Cadexomer iodine had beneficial effects in all phases of the healing process without cytotoxicity due iodine absorption. 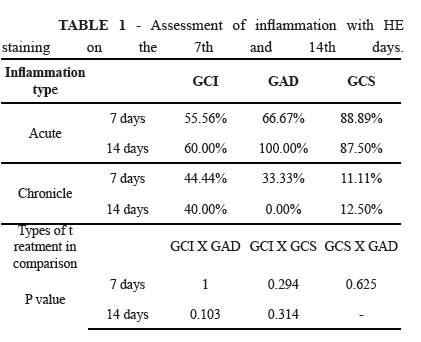