To investigate whether there are differences between the phagocytic function of the remaining lower spleen pole after subtotal splenectomy and autogenous splenic implants.

Thirty-six male Wistar rats, weighting 364 ± 60g were used. They were subjected to subtotal splenectomy preserving the lower spleen pole and to autogenous splenic implant in the greater omentum. Its viability was assessed microscopically. Phagocytic function was assessed by splenic uptake of the radioisotope-labeled colloid and by macrophages counting.

Until the 16th week, the phagocytic function was more pronounced in autogenous splenic implants when compared with the lower spleen pole, but it became similar thereafter.

There are situations in which it is not possible to preserve the spleen and then splenectomy becomes inevitable. In these circumstances, the autogenous splenic implant is able to keep, at least in part, splenic functions with small risk of complications. According to Holdsworth, Griffini and Tizzone55. Holdsworth RJ. Regeneration of the spleen and splenic autotransplantatio. Br J Surg. 1991 Mar;78: 270-8. doi: 10.1002/bjs.1800780305.
https://doi.org/10.1002/bjs.1800780305... performed the first splenic implants in dogs. In 1896, Albrecht performed this surgery in humans in order to treat splenic traumas.

Studies on the phagocytic function of the remaining lower pole from subtotal splenectomy as well as studies comparing this technique with autogenous splenic implants were not found in the literature. This gap motivated the current study.

Prospective, experimental research, performed in 36 male Wistar rats, aged between 2 and 3 months with average weight of 364 ± 60 grams. The animals were divided into seven groups of five animals, with the exception of the second group which consisted of six animals, according to the postoperative follow-up time period, i.e.: one day (G1), seven days (G7 ) thirty days (G30), sixty days (G60) ninety days (90), one hundred and twenty days (120) and one hundred and fifty days (150).

The animals were placed in appropriate cages and were properly identified and kept in suitable conditions for the studied species. They received appropriate feed and water ad libitum.

The animals were weighed ((Filizola(r) electronic scale, Model MF-6 - 1g sensitivity) and anesthetized with ketamine hydrochloride (Vetaset(r), Fort Dodge - Iowa, USA) at a dose of 50mg/kg of body weight, associated with xylazine hydrochloride (Kensol(r), König - Avellaneda, Argentina) at an intraperitoneally delivered dose of 5 mg/kg. The surgical procedure consisted in: supraumbilical median laparotomy, mobilization of the spleen out of the abdominal cavity with ligature and division of the vessels that irrigated the upper and middle portion of the spleen along its border, with 5-0 mononylon sutures; subtotal splenectomy preserving the lower pole supplied by gastrosplenic ligament vessels, without suture in the bloody border. The part removed from the spleen was divided into five fragments for settling the autogenous splenic implants; the first upper fragment was submitted to control study, the other four fragments were sutured to the greater omentum by using 5-0 mononylon suture; hemostasis and laparotomy layered review.

The phagocytic functions of the remaining lower pole and autogenous splenic implants were verified by sodium phytate splenic uptake and by counting macrophages, which were performed after the animals were euthanized. The colloidal carbon was obtained from India ink, which consists of soot mixed with gum arabic and fragrance. Such ink was placed in a Becker bottle, and subsequently, in a drying oven at 100ºC. The remaining pulp was diluted at the ratio of 50g/100ml water. The animals were anesthetized with ketamine and xylazine hydrochloride three hours before the removal of tissues for study purposes. A colloidal carbon solution was injected, by using a one milliliter syringe, at a dose of 1ml/kg in the rat's right jugular vein for counting macrophages. After two hours, a sodium phytate solution injection labeled with 110MBq (3mCi) of 99m technetium (99m Tc) was applied for splenic uptake. Three hours (3h) after the initial colloidal carbon injection, each animal was euthanized by means of intraperitoneal injection of pentobarbital (3% hipnol) at a dose of 120mg/kg of body weight. When no response was found to stimuli, 10% potassium chloride was injected in the 0.5 ml intracardiac dose. Then, re-laparotomy was performed in the same incision and the lower pole and autogenous splenic implants were removed for phagocytic function evaluation. The intake of autogenous splenic implants and inferior pole was obtained by dose counter (Curiometer / Graduated Beacker), model CRC 7 (Radioisotope Calibrater by Carpintec), in which the intake calculation was made by counting the radioisotopes activity during samples reading. Then, the splenic tissues were processed for histological examination. Splenic fragments were embedded in paraffin, cut with a 3-micrometers-thick rotating microtome, and processed and fixed on microscope slides. The slide staining was performed with hematoxylin and eosin for morphological studies, and with light green for counting the macrophages that contained colloidal carbon pigment. This counting was performed in 10 microscopic fields with 400x magnification using the advanced free open source software, called Cellprofiler, developed for biomedical research1212. Disponível em: www.cellprofiler.org
www.cellprofiler.org... . The final number of macrophages was provided by the average of macrophages containing colloidal carbon found in these fields.

Statistical evaluation was initiated by data descriptive analysis in order to describe or summarize the study data. The comparison between the weights of autogenous splenic implants and lower poles, the technetium radioisotopes uptake and the macrophage number count in the different pre- and post-operative periods was performed by Mann-Whitney test1313. Mann HB, Whitney DR. On a test of whether one of two rando variables is stochastically larger than the other. Ann Mathematical Statistics. 1947 Mar;18(1):1-164. doi: 10.2307/2236101.
https://doi.org/10.2307/2236101... . In all tests, the 5% significance alpha level was used.

The radioisotopes uptake was higher in the autogenous splenic implants than it was in the lower spleen pole in G7 and G120 (p<0.05); however, there was no difference in the other groups (p>0.05) (Table 1).

By histological evaluation, it was possible to see that animals from groups G7 and G30 showed almost the same characteristics. Figure 1 shows necrosis foci with severe fibrosis and vascular neoformation.

In the G60, G90, G120 and G150 groups, the microscopic morphology of the autogenous splenic implant was considered as normal, since splenic tissue with splenic capsule (white arrow) and lymphoid follicles (pink arrow) are present (Figure 2).

In this study, an animal from G60 died shortly after the colloidal carbon injection. Its autopsy did not define the cause of death. It happened probably due to embolism once the animal showed respiratory failure followed by death right after the radioactive substance was administered. Lower spleen pole and autogenous splenic implants were not found in an animal from G30 and in another one from G90. A mass of about 4 cm, with fibrous tissue shell containing infectious-like material, was found in one of these animals, in the same location of the autogenous splenic implant and the lower pole. It is likely that these structures have undergone necrosis, followed by abscess. In another animal, the probable cause for the absence of structures was not found.

G7 had an extra animal because it was considered as the most controversial group regarding the phagocytic function recovery time in the autogenous splenic implants and lower pole. However, the results found for this animal did not differ from the ones found for the other animals.

Abnormalities were not found in the control fragment removed from the spleen. The histological architecture was considered as normal in all of them.

It is known that the spleen tissue exerts its function in several parts of the body in which it is implanted. In this study, we chose to implant them into the greater omentum, which has abundant vascularization and which venous drainage goes towards the portal vein. The splenic blood flows directly to the liver, as well as it happens in normal conditions with the ectopic spleen venous drainage, which shows the best results according to the literature. Nevertheless, in the lack of omentum there is also an option for the mesentery or mesocolon, which drainage processes are also related to the portal system1414. Weber T, Hanisch E, Baum RP. Late results of heterotopic autotransplantation of splenic tissue into the greater omentum. World J Surg. 1998 Aug;22(8):883-9. PMID: 9673564. , 1515. Linuma H, Okinaga K, Sato S, Tomioka M, Matsumoto K. Optimal site and amount of splenic tissue for autotransplantation. J Surg Res. 1992 Aug;53(2):109-16. PMID: 1405598..

In the first postoperative week of this study, there was no radioisotope uptake by the autogenous splenic implants (radioisotope uptake with a mean of 0.4 is considered insignificant). However, on the seventh postoperative day, the autogenous splenic implant showed evidences of phagocytic function which is characterized by both radioisotope uptake and the presence of colloidal carbon within their macrophages. The radioisotope uptake increased gradually until the date of the last group (G150) in both structures. This fact shows that the phagocytic function requires a period of time to fully recover. It is worth remembering that, in the current study, the splenic tissue mass from the autogenous splenic implant was significantly higher than the lower spleen pole mass. This may explain, in part, the best phagocytic function of these implants when compared with the lower pole, because the spleen function regeneration seems to be directly related to the implanted splenic mass1515. Linuma H, Okinaga K, Sato S, Tomioka M, Matsumoto K. Optimal site and amount of splenic tissue for autotransplantation. J Surg Res. 1992 Aug;53(2):109-16. PMID: 1405598..

In the radioisotope uptake analysis performed in the separated groups, it was found that there was no difference between the autogenous splenic implants and the lower pole in G1, G30, G60, G90 and G150. In groups G7 and G120, however, the uptake by the autogenous splenic implant was higher, showing a significant difference. Importantly, the implants' weight was significantly higher than the lower pole one in these two groups.

In the phagocytic function analysis by counting macrophages, it was found that the counting of macrophages was higher in G1, G60, G90 and G120, in which there were also significant differences in the autogenous splenic implant weights when compared with the lower spleen pole weight. Perhaps, it can justify the abovementioned results. G150 showed difference neither in radioisotope uptake nor in the number of macrophages between the autogenous splenic implant and the lower spleen pole. There was also no difference between the autogenous splenic implant and lower pole weights. The lower pole seems to grow over time, and thus improve its function88. Paulo MSL, Paulo ICAL, Nunes TA, Silva AL da, Cintra LC, Paulo DNS. Effect of hyperbaric oxygen therapy in rats with subtotal splenectomy preserving the inferior pole. Acta Cir Bras. 2010 May/Jun;26(3):156-8. doi: 10.1590/S0102-86502011000300002.
https://doi.org/10.1590/S0102-8650201100... .

After the initial period of necrosis, the autonomous splenic implant is able to regenerate itself. The neovascularization originates from the arterial branches surrounding the implantation area. In the case of omental implant, it comes from gastro-omental arteries, with venous drainage towards the portal vein, similar to the spleen in situ, with centripetal orientation relative to the implant, starting a few days after this procedure1717. Tavassoli M, Ratzan RJ, Crosby WH. Studies on regeneration of heterotopic splenic autotransplants. Blood. 1973 May;41(5):701-9. PMID:4694085. , 1818. Marques RG, Petroianu A. Autoimplante esplênico em rato: Regeneração morfológica e função fagocitária. Rev Hosp Univ P Ern UERJ. 2002 Nov/Dec;1:11-9. doi: 101590/S0102-86502004000600011.
https://doi.org/10.1590/S0102-8650200400... .

The autogenous splenic implant has not been widely performed in the treatment of traumatic splenic injuries. This practice should be encouraged and further research should be carried out aiming to develop less invasive techniques for treating spleen diseases, because when part of this organ is preserved, splenic function is maintained and asplenia adversities are prevented.

Up to the 16th week, the phagocytic function was more pronounced in autogenous splenic implants when compared with the lower spleen pole, but it became similar after this period. 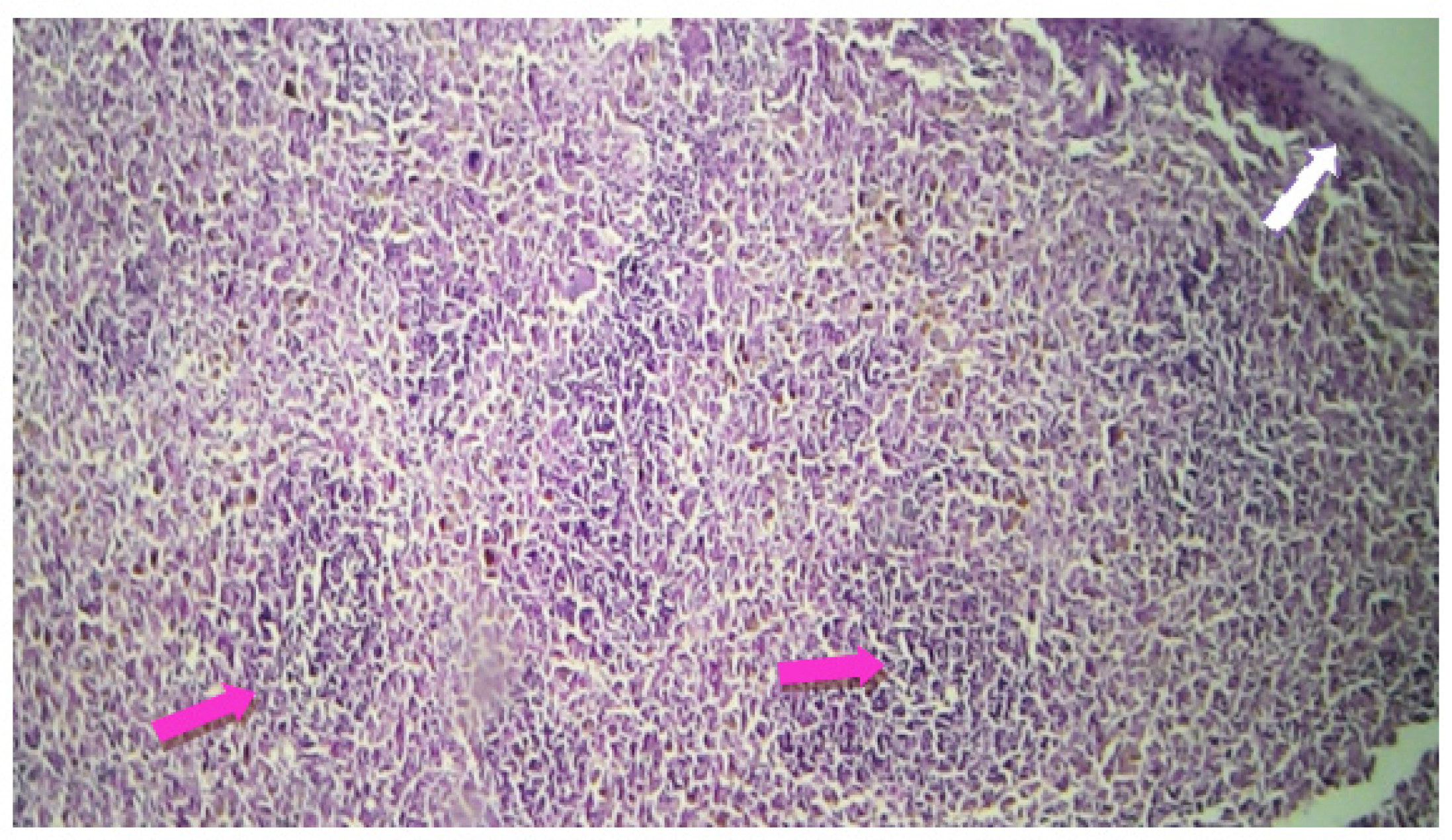