Associate Professor, Division of Urology, Department of Surgery and Anatomy, FMRP-USP, Ribeirao Preto-SP, Brazil. Design the protocol, final approval of the version to be published

To evaluate the effect of diabetes mellitus and of sildenafil citrate on female urethral function.

A significant increase in urethral pressure was observed during micturition.

Diabetes mellitus (DM) is a metabolic dysfunction characterized by a defect in the action and/or secretion of insulin resulting in hyperglycemia. The estimate is that there are more than 150 million in the world11. Franc C. Epidemiology of diabetes: frightening predictions. Med Sci (Paris). 2013;29(8-9):711-4..

Diabetic cystopathy (DC) is one of the most common complications of DM involving high costs for the health system. Dysfunctions of the urinary tract have been identified in more than 50% of diabetic patients even when they are asymptomatic22. Liu G, Daneshgari F. Alterations in neurogenically mediated contractile responses of urinary bladder in rats with diabetes. Am J Physiol Renal Physiol. 2005;288:1220-6..

Nitric oxide (NO) acts as a non-adrenergic and non-cholinergic neurotransmitter in the bladder and the urethra and promotes the relaxation of smooth muscle fibers by the activation of guanylate cyclase, which is responsible for the transformation of GMP to GMPc. Since sildenafil citrate inhibits the activity of phsphodiesterase-5, which promotes GMPc hydrolysis, there is an increase in this compound. Thus, there is a scientific basis for the use of sildenafil not only for the treatment of erectile dysfunction, but also for detrusor hyperactivity66. Mersdorf A, Schmidt RA, Tanagho EA. Urodynamic evaluation and electrical and pharmacologic neurostimulation. The rat model. Urol Res. 1993;21:199-209..

The objective of the present study was to assess the effects of sildenafil citrate on the function of the lower urinary tract after six weeks of DM induction.

Twenty-nine female Wistar rats (Rattus norvegicus albinus) of the same age weighing on average 250 g were used. The animals were house in collective cages at room temperature on sunlight cycle, with water and ration ad libitum. Diabetes mellitus (DM) was induced at random in 14 rats by a single intraperitoneal injection of alloxan, 40 mg/kg body weight, dissolved in 0.05 M sodium citrate, pH 4.5, at 4oC. Blood glucose level was determined by the glucose oxidation method (Accu-Check Complete System, Roche) 72 hours after alloxan administration. All diabetic animals had a glycemia level of more than 300 mg/dl.

All animals were kept under ideal conditions on a 12 hour light cycle with free access to water and ration.

The evaluation was performed after intraperitoneal anesthesia with urethane (1.25 mg/kg weight)66. Mersdorf A, Schmidt RA, Tanagho EA. Urodynamic evaluation and electrical and pharmacologic neurostimulation. The rat model. Urol Res. 1993;21:199-209.. After suprapubic median laparotomy, a PF-50 polyethylene catheter was introduced and fixed on the bladder fundus and exteriorized by counter- opening in the dorsolateral region. The absence of local extravasation and catheter permeability were checked7 7. Suaid HJ, Rocha JN, Martins AC, Cologna AJ, Tucci SJ. Modulation of urethral alpha-sympathetic by parasympathetic before and following bethanechol chloride injection. In Braz J Urol. 2003;29:162-5.and cystometry was performed through this catheter.

For the determination of urethral pressure (UP) a polyethylene catheter (0.64 mm outer diameter and 0.50 mm inner diameter) was positioned at the level of the bladder neck and connected in "Y" to the system for pressure recording. Saline solution was infused through the catheter with an infusion pump at a flow of 0.75 ml/minute.

Each animal was submitted to urodynamic evaluation for 30 minutes and sacrificed while still under the effect of anesthesia.

The obtained values of parameters of cystometry and urethral pressure recordings were evaluated using nonparametric Kruskal Wallis with Dunn post-test, considering significant differences with a p<0.05. The results were expressed as mean ± standard deviation (SD). Calculations were made using GraphPad Prism 3.02.

The mean serum glucose level of female rats with alloxan-induced diabetes was 400.0 mg/dl, as opposed to mean pre-induction levels of 100 mg/dl.

There was a significant increase in this variable in the group of diabetic rats. The post hoc Dunn test revealed that this difference occurred between G1 and G3 animals (p=0.0278)*. 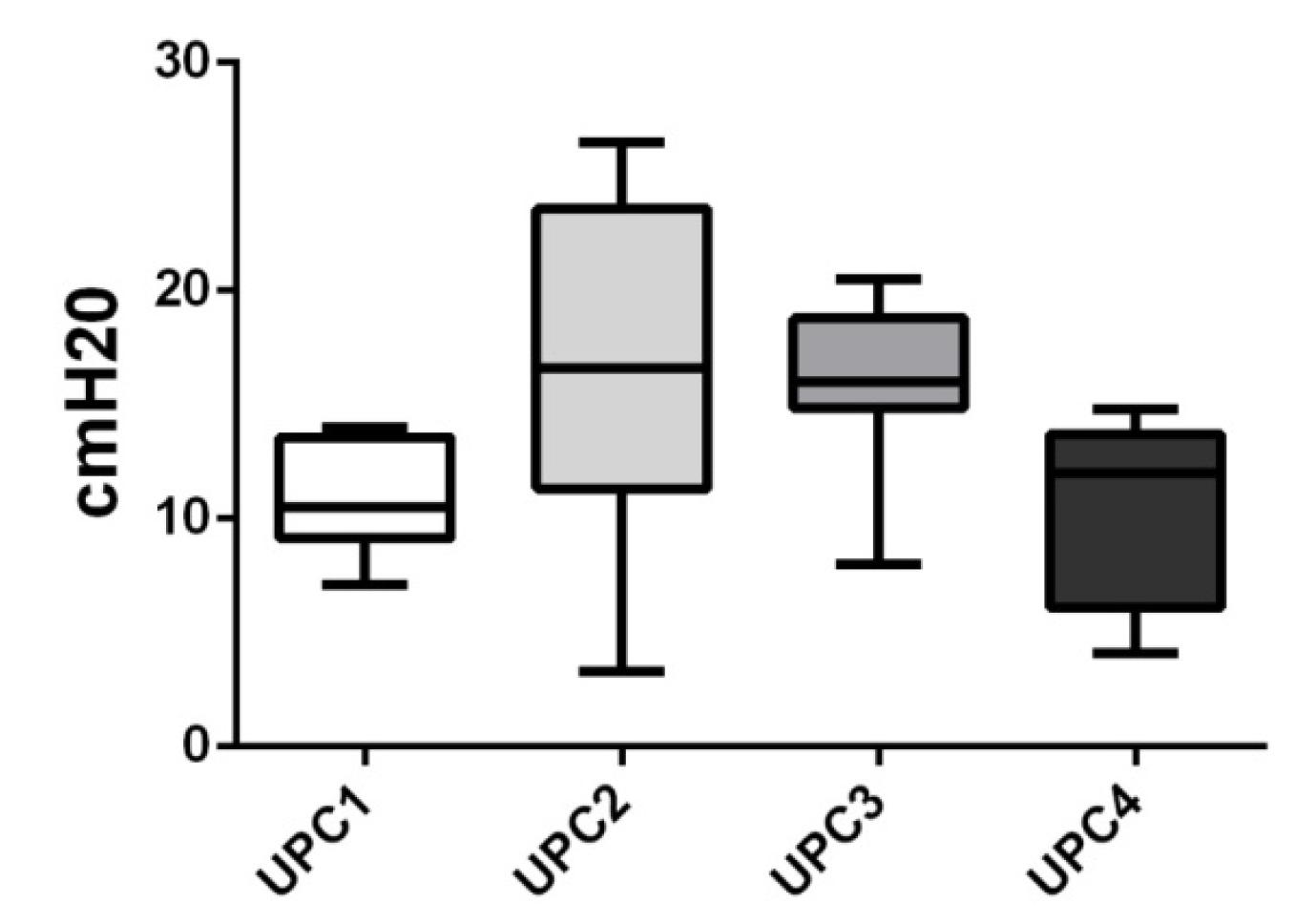 There was no significant difference between groups in this variable. However, the p value was found to be quite close to the level of significance adopted (p=0.07).

The variations in urethral pressure during the micturition cycle in normal (Figure 2a) and diabetic (Figure 2b) rats can be observed in the tracings of the urodynamic recordings. A deficit of urethral relaxation occurred in the diabetic animals, especially during the phase of bladder emptying, and an increase occurred in the time of detrusor contraction. 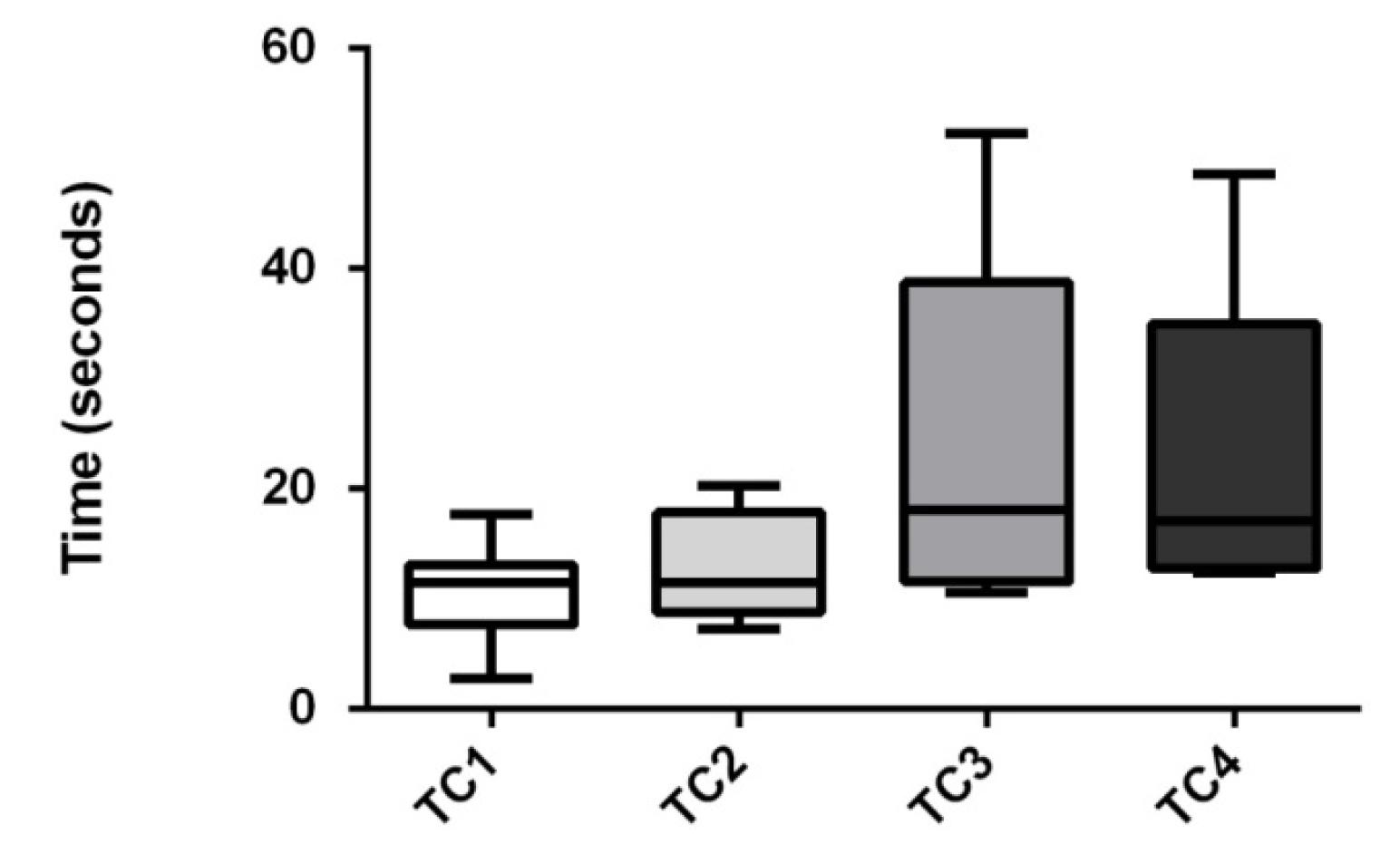 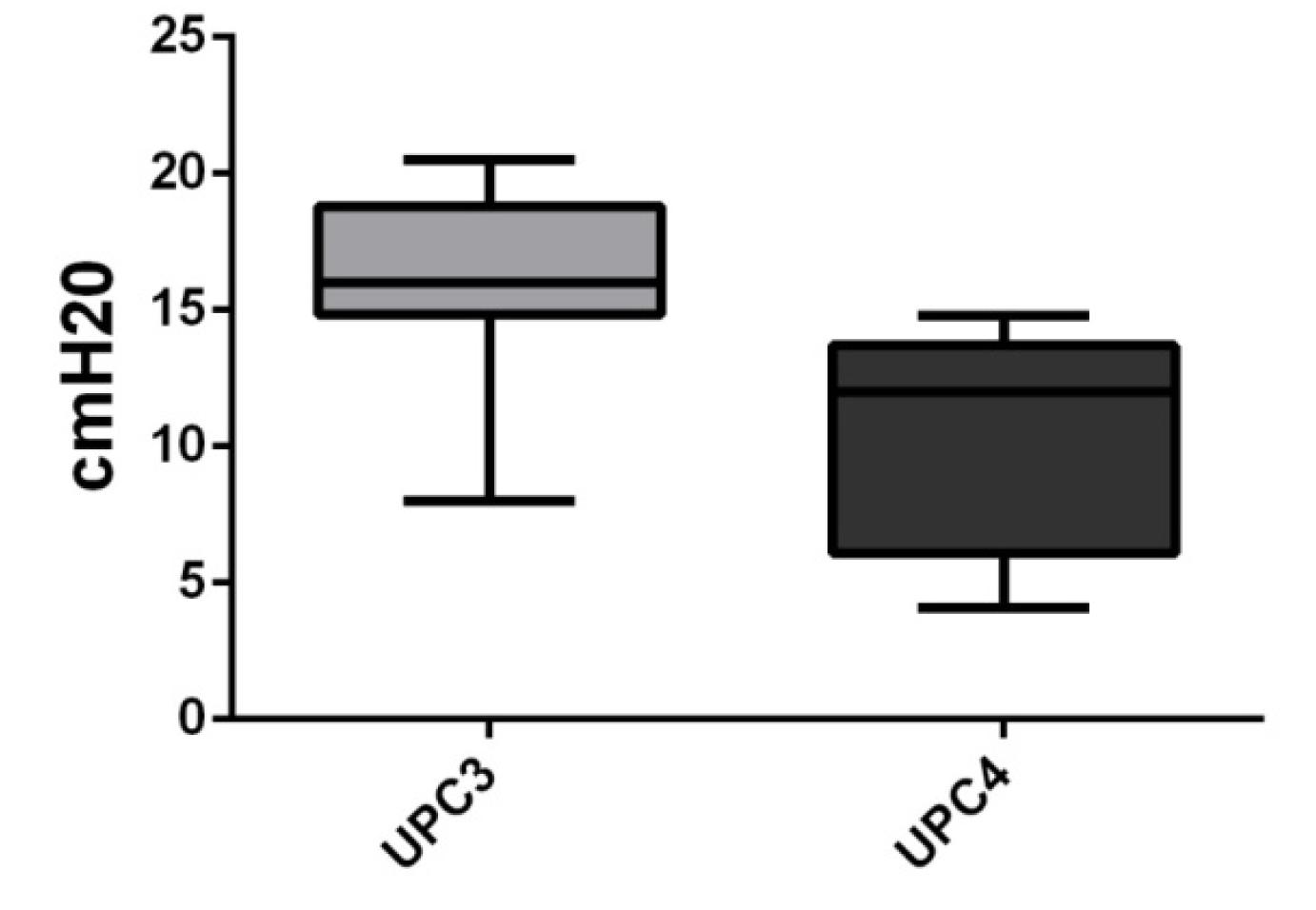 FIGURE 4
Comparison of urethral pressure during contraction of the detrusor in groups G3 and G4 in cmH20.

DM has reached epidemic proportions around the world and its complications are determinants of the quality of life of the patient. Clinical manifestations of diabetic cystopathy frequently involve a variety of symptoms such as voiding difficulty, residual post-micturition volume, overflow urinary incontinence, and reduced micturition pressure44. Yoshimura N, Chancellor MB, Andersson KE, Christ GJ. Recent advances in understanding the biology of diabetes-associated bladder complications and novel therapy. BJU Int. 2005;95:733-8.. However, it is common changes in the storage phase during early stages of the DM which include increased frequency, urgency and detrusor hyperactivity55. Uckert S, Oelke M. Phosphodiesterase (PDE) inhibitors in the treatment of lower urinary tract dysfunction. Br J Clin Pharmacol. 2011;72(2):197-204..

This modification of urethral pressure is not considered to be significant during the phase of bladder filling in the early stages of diabetes. This demonstrates that the increase in urethral pressure is more pronounced during micturition, a fact that may promote incomplete micturition and the presence of a post-micturition residue characterized by the classical symptoms of DC.

The sympathetic nerves at the S2 to S4 medullary level supply the smooth muscle of the urethral sphincter and the somatic branches of the pelvic nerve innervate the striated muscle of the rhabdosphincter of the urethra99. Strasser H, Bartsch G. Anatomy and innervation of the male urethra. Semin Urol Oncol. 2000;18:2-8.. The sympathetic innervation mediates the urethral contraction via α-adrenergic receptors in the bladder neck and proximal urethra. The nitric oxide released by the postganglionic parasympathetic neurons mediates the urethral relaxation during the micturition reflex1010. Bennet BC, Kruse MN, Roppolo JR, Flood HD, Fraser MO, de Groat WC: Neural control of urethral outlet activity in vivo: role of nitric oxide. J Urol. 1995;153:2004-9.. DC has been primarily attributed to peripheral polyneuropathy involving autonomic, somatic, sensory and motor nerves1111. Ueda T, Yoshimura N, Yoshida O. Diabetic cystopathy: relationship to autonomic neuropathy detected by sympathetic skin response. J Urol. 1997;157:580-4.. However, DM also impairs the urethral innervations and directly injures the urethral smooth and striated muscle. The result of diabetic urethropathy may degrade voiding function by the deficit caused in the innervation and in the reflexes between the urethra and the bladder

Yang et al.1313. Yang Z, Dolber PC, Fraser MO. Diabetic urethropathy compounds the effects of diabetic cystopathy. J Urol. 2007;178:2213-9. observed a significant deficit of urethral relaxation in rats by five to 10 weeks after induction of DM. They also observed that the increase in urethral resistance was due in part to the presence of vesical-sphincter dyssynergia (VSD), present in 30% of the diabetic rats studied and absent in all healthy rats. VSD was clearly demonstrated by the increased activity of tonic fibers of the external urethral sphincter and the cited study also revealed that treatment with alpha-bungarotoxin, a blocker of skeletal muscle activity, promoted a marked reduction of the urethral pressor profile in diabetic rats, suggesting that external urethral sphincter activity may be dysfunctional in the voiding cycle of DM.

Furthermore, the same study demonstrated that, in addition to urethral dysfunction of the external sphincter, there is also a reduction of relaxation of urethral smooth muscle mediated by nitric oxide (NO) and sensitization of urethral smooth muscle to alpha-adrenergic agonists. These last two effects are more pronounced over a more prolonged time of diabetes induction1313. Yang Z, Dolber PC, Fraser MO. Diabetic urethropathy compounds the effects of diabetic cystopathy. J Urol. 2007;178:2213-9..

NO is the major neurotransmitter that mediates the relaxation of urethral smooth muscle during micturition in rats and in other species1414. Wibberley A, Nunn PA, Naylor AM, Ramage AG: An investigation of the effects of zaprinast, a PDE inhibitor, on the nitrergic control of the urethra in anaesthetized female rats. Br J Pharmacol. 2002;136:399-414.. Changes in NO production are involved in dysfunction of the penis, bladder and other organs. However, the involvement of changes in the production and efficacy of NO in urethral dysfunction due to diabetes has been little documented in the literature.

The findings of the present study suggest that in diabetic female rats the high levels of urethral pressure during micturition may be an important factor for the understanding of the physiopathology of DC.

Sildenafil citrate promoted partial relaxation of the urethra of about 35.3%. Other study demonstrated significant relaxation of the bladder strips by 37.3% and of the urethra strips by 44.0%1515. Lee JG, Moon du G, Kang SH, Cho DY, Park HS, Bae JH. Relaxation effect of phosphodiesterase-5 inhibitor on the animal bladder and prostatic urethra: in vitro and in vivo study. Urol Int. 2010;84(2):231-5.. This finding suggests that the phosphodiesterase-5 inhibitors had relaxant effects on the urethra smooth muscle. The autor suggest that PDE-E inhibitors could be applied as an effective treatment ofr BPH and LUTS.

NO pathway contributes to the control of urethral function in diabetes, but is not the only pathway involved in this effect. There are other factors that control urethral function, such as the autonomic fibers, which provide the nerve supply for the urethra, and muscle fibers which, when altered, may promote VSD1313. Yang Z, Dolber PC, Fraser MO. Diabetic urethropathy compounds the effects of diabetic cystopathy. J Urol. 2007;178:2213-9.. We may also cite the neutrotransmitters that mediate the relaxation of urethral smooth muscles such as carbon monoxide, vasoactive intestinal polypeptide, adenosine triphosphate, noradrenaline, and beta-adrenergic receptors.

Sildenafil citrate has been reported to act both on the bladder and on the bladder neck. In rats chronically treated (six weeks) with sildenafil citrate by the oral route, with treatment starting at the time of induction of mild obstruction of the bladder neck, there was prevention of hypertrophy of the detrusor muscle, detrusor hyperactivity and collagen deposition in the lamina propria and in smooth muscle, characteristic of bladder outlet obstruction1818. Beamon CR, Mazar C, Salkini MW, Phull HS, Comiter BC. The effect of sildenafil citrate on bladder outlet obstruction: a mouse model. BJU Int. 2009;104:252-6.. In humans, daily Phospdiesterase 5 inhibitors (PDE5Is) alone or in association with alpha-blockers AB also demonstrate efficacy in this indication1919. Game X, Cornu JN, Robert G, Descazeaud A, Droupy S, Bernard-Laribiere C, Guy L, Bruyere F, Karsenty G. Drugs for urethra. Prog Urol. 2013;23(15):1287-98..

In the present study, the treatment was acute, with the administration of a single dose of sildenafil citrate and urodynamic evaluation performed one hour later. Sildenafil citrate acted by partially reducing urethral pressure during micturition.

The differences between reports may be due to different methodologies, differences in animal gender and variation in the time of diabetes induction. Although there is wide variability in the results of these studies, it can be seen that DM significantly changes the function of urethral smooth muscle, although little is effectively known about the possible mechanisms involved in these alterations.

Thumbnail
FIGURE 4
Comparison of urethral pressure during contraction of the detrusor in groups G3 and G4 in cmH20.
Thumbnail
TABLE 1
Functional variables analyzed in the groups.

FIGURE 4   Comparison of urethral pressure during contraction of the detrusor in groups G3 and G4 in cmH20.