To investigate the effect of curcumin on visfatin and zinc-α2-glycoprotein (ZAG) expression levels in rats with non-alcoholic fatty liver disease (NAFLD).

Fifty-six male rats were randomly divided into a control group (n=16) and model group (n=40) and were fed on a normal diet or a high-fat diet, respectively. Equal volumes of sodium carboxymethyl cellulose (CMC) were intragastrically administered to the control group for 4 weeks. At the end of the 12th week, visfatin and ZAG protein expression levels were examined by immunohistochemistry. Visfatin mRNA levels were measured by semi-quantitative reverse transcription polymerase chain reaction.

Visfatin and zinc-α2-glycoprotein may be involved in the pathogenesis of NAFLD. Treatment of NAFLD in rats by curcumin may be mediated by the decrease of visfatin and the increase of non-alcoholic fatty liver disease.

So far, there is no satisfactory treatment for NAFLD, and comprehensive therapies are usually performed in clinics. There are efficacy and safety concerns regarding a variety of drugs intended for the treatment of NAFLD. Recent studies have shown that curcumin has many effects such as antioxidant and anti-inflammatory effects, and oxygen free radical-scavenging effect. Curcumin is the main active ingredient in turmeric99 Cheng Y, Ping J, Xu LM. Effects of curcumin on peroxisome proliferator-activated receptor gamma expression and nuclear translocation/redistribution in culture-activated rat hepatic stellate cells. Chin Med J (Engl). 2007 May;120(9):794-801. PMID: 17531121., and research has shown that it has some therapeutic effect on NAFLD1010 Nanji AA, Jokelainen K, Tipoe GL, Rahemtulla A, Thomas P, Dannenberg AJ. Curcumin prevents alcohol-induced liver disease in rats by inhibiting the expression of NF-kappa B-dependent genes. Am J Physiol Gastrointest Liver Physiol. 2003 Feb;284(2):G321-7. PMID: 12388178.,1111 Nair P, Malhotra A, Dhawan DK. Curcumin and quercetin trigger apoptosis during benzo(a)pyrene-induced lung. Mol Cell Biochem. 2015 Feb;400(1-2):51-6. doi: 10.1007/s11010-014-2261-6.
https://doi.org/10.1007/s11010-014-2261-... . However, the specific mechanism is unclear.

Animals and establishment of NAFLD model

This study was carried out in strict accordance with the recommendations in the Guide for the Care and Use of Laboratory Animals of the National Institutes of Health. The animal use protocol has been reviewed and approved by the Institutional Animal Care and Use Committee (IACUC) of the First Affiliated Hospital of Sichuan Medical University.

Fifty-six healthy male Sprague Dawley rats, weighing 210 ± 30 g, were provided by the experimental animal center of Luzhou Medical College. They were raised, 8 rats per cage, in the laboratory animal center of Affiliated Hospital of Luzhou Medical College. Temperature was maintained at 15-25°C with 12 h of light and dark, and all the rats were free to eat and drink. They were randomly divided into the control group (16 rats) and the model group (40 rats), and were fed with a normal diet or high-fat diet (82.5% normal diet + 10% lard + 2% cholesterol (Lanji Technology Development Co., Ltd., Shanghai, China) + 0.5% sodium cholate (Lanji Technology Development Co., Ltd., Shanghai, China) + 5% sucrose), respectively. Rats in both groups were sacrificed at the end of the 8th week, and their livers were taken for pathological examination, in order to confirm that the NAFLD rat model was successfully established.

Test of liver function and HE staining of liver tissue

Sections were deparaffinized with water and citric acid buffer (pH = 6.0) for high-pressure antigen repair, and soaked for 10 min (in darkness) with 3% methanol and hydrogen peroxide to eliminate the activity of endogenous catalase. Visfatin rabbit-anti-rat polyclonal antibody (Proteintech Bio Technology Co. Ltd., Shanghai, China) and ZAG rabbit-anti-rat polyclonal antibody (1:100; Bioworld Bio Technology Co. Ltd., Guangzhou, China) were added and incubated at 27°C for 60 min. Next, secondary antibody was added and incubated at 27°C for 30 min. 3,3′-Diaminobenzidine (DAB) staining of the sections for 5-10 min was monitored under a light microscope, the sections washed under running water and counterstained with hematoxylin for 2 min. This was then followed by 0.1% dilute hydrochloric acid for differentiation and saturated with lithium carbonate, dehydrated, made transparent, and mounted. Integrated optical density (IOD) of visfatin and ZAG protein via immunohistochemistry was calculated with the software Image-Pro Plus.

SPSS19.0 software was used to analyze data, and the experimental data were expressed by ±s. One-way ANOVA was used in the comparison between groups, and P < 0.05 was considered statistically significant.

The rats in the control group were in good mental state, agile, and active. Their fur was bright, and their weight gradually increased on a normal diet. However, in the model group, rats were lazy to move and inactive, their fur was less shiny, and early weight gained on their diet decreased slightly. The state of the intervention group was between that of the control and model group.

Liver index of the rats

Liver function of the rats

The serum ALT and AST of the model group increased as compared to the control group (P < 0.01), and continued to increase as time passed (P < 0.05). Curcumin could decrease serum ALT and AST levels in the rats (compared with the model group, P < 0.01). Furthermore, AST and ALT levels decreased with increasing concentration of curcumin and were significantly different between the groups with low, medium, and high dose (P < 0.05). However, the serum levels of ALT and AST did not decrease to normal with curcumin intervention (P < 0.05).

Blood lipid of the rats

The levels of TC and TG in the model group were significantly higher than the control group (P < 0.01) and they increased (P < 0.05) with passing time. Curcumin could decrease serum TC and TG levels in treated rats (compared with the model group, P < 0.05), and the effect was dose dependent. Serum TC levels was significantly different between treated groups (P < 0.01), but there was no significant difference in serum TG (P > 0.05). The serum TC and TG levels were not reduced to normal with curcumin intervention (P < 0.05).

Liver pathology of the rats

The examination of the control rats' livers showed that structure of hepatic lobule was intact, hepatic cord was radial, and central vein and portal tracts were clear. Furthermore, there was neither steatosis of the liver cell, ballooning degeneration, nor infiltration by inflammatory cells.

Vacuoles were visible in liver cells of rats in the model group after 8 weeks, showing severe macrovesicular fatty change, obvious ballooning degeneration with infiltration of a small number of inflammatory cells. In the model group, the structural disorder of the liver was observed at 12-weeks. The liver cells were swollen with a large number of lipid droplets. Varying degrees of inflammation with punctiform or piecemeal necrosis could be seen. More necrosis foci than at 8-weeks with obvious ballooning degeneration were observed.

Visfatin and ZAG protein expression in rat livers by immunohistochemistry

Compared with the control group, visfatin level increased (P < 0.01) but ZAG level decreased in the model group (P < 0.01). This trend was maintained with increasing time (P < 0.01). Curcumin could reduce visfatin levels and increase ZAG levels in liver tissue of rats (compared with the model group, P < 0.01), and the effect was dose dependent. Visfatin and ZAG levels in liver tissue were significantly different between groups treated with low, medium, and high dose (P < 0.01). Curcumin intervention did not restore either visfatin or ZAG levels to normal (P < 0.05). The control group was similar to the model group (Table 2, Figures 2 and 3).

Thumbnail
TABLE 2
Visfatin and ZAG in liver of rats were detected by immunohistochemistry.

Thumbnail
TABLE 3
Visfatin mRNA in liver of rats was detected by RT-PCR. 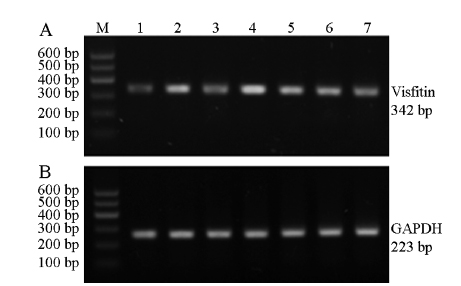 Our results showed that compared with the control group, the expression of ZAG in the model group was significantly decreased, and that with increasing duration of high-fat feeding, the expression further decreased. The high level of insulin, hyperlipidemia, hyperglycemia, and aggravated pathological changes of liver tissue, proving that ZAG of the liver tissue played a protective role in the development of NAFLD. The decline in ZAG expression of liver tissue could lead to disorder of hepatic lipid metabolism, thus forming NAFLD.

In this study, we showed that the expression of visfatin protein increased and that of ZAG decreased in NAFLD rats. The change in expression of ZAG and visfatin in liver tissue of the rats induced NAFLD. Therefore, is the expression of visfatin and ZAG protein a new mechanism of NAFLD, and can curcumin inhibit visfatin expression and induce ZAG expression in liver tissue for the treatment of NAFLD? Although the effect of curcumin as an anti-inflammatory and anti-oxidant has been proved, further studies on the prevention and treatment of NASH were still needed. In this study, curcumin treatment was used for NAFLD rats fed on a high fat diet for 4 weeks, and it was found that it could significantly improve liver function, relieve hepatic steatosis and inflammation, thereby proving the therapeutic effect of curcumin on NAFLD. Palma et al.4040 Palma HE, Wolkmer P, Gallio M, Corrêa MM, Schmatz R, Thomé GR, Pereira LB, Castro VS, Pereira AB, Bueno A, de Oliveira LS, Rosolen D, Mann TR, de Cecco BS, Graça DL, Lopes ST, Mazzanti CM. Oxidative stress parameters in blood, liver, and kidney of diabetic rats treated with curcumin and/or insulin. Mol Cell Biochem. 2014 Jan;386(1-2):199-210. doi: 10.1007/s11010-013-1858-5.
https://doi.org/10.1007/s11010-013-1858-... found that curcumin can promote differentiation of preadipocytes and reduce visfatin and resistin mRNA expression. This study showed that curcumin could improve IR, and significantly reduce levels of serum TG, TC. It could also increase ZAG expression and reduce visfatin activity as observed by the significant decrease in levels of serum ALT and AST, and improvement of liver histopathology.

In this study, we did not measure TNF-α and IL-6 levels, which was a limitation of the study.

Visfatin and zinc-α2-glycoprotein may be involved in the pathogenesis of NAFLD. Treatment of NAFLD in rats by curcumin may be mediated by the decrease of visfatin and the increase of non-alcoholic fatty liver disease.

TABLE 2   Visfatin and ZAG in liver of rats were detected by immunohistochemistry.

TABLE 3   Visfatin mRNA in liver of rats was detected by RT-PCR.