Behavior of Saanen dairy goats in an enriched environment

The objective of the present study was to evaluate the behavior of lactating Saanen dairy goats housed with or without the use of environmental enrichment technique. Twelve animals were split into two equal groups and assign to one of two treatments: stall with or without enrichment. Five objects were used to enrich the stalls: plastic PET bottles suspended and freely on the floor (both filled with corn as a visual and auditory stimuli), general cleaning brushes fixed to the wall of the stall, suspended tire, and a tree trunk for climbing. The behavior of the goats was observed during two hours for 10 consecutive days. The behaviors were recorded using focal-animal sampling method, observing each animal during 10-minute period. Descriptive statistics were calculated plotting the results in behavior frequency charts. Animals on both treatments showed similar behaviors frequencies for food intake and self-cleaning. However, a higher frequency of stereotyped behaviors was registered in the treatment without environmental enrichment. The highest frequency of interaction was observed for suspended tire, indicating animal’s preference for this object. In conclusion, animals on enriched environment show more different behaviors than animals in non-enriched environment and showed greater preference for some object over others.

The market has become more demanding about the quality of the products from this sector. It is, therefore, important that Brazilian producers understand and adapt to the international market demands and dynamics for goat meat, milk, and derivative products. Environmental enrichment can improve animal welfare and production.

The stress is related to animals’ physiology and the environment in which they are housed. When animals are stressed, they develop atypical behaviors, which negatively affect their welfare, and consequently, their productive and reproductive performance (Marai, El-Darawany, Fadiel, & Abdel-Hafez, 2007Marai, I., El-Darawany, A., Fadiel, A., & Abdel-Hafez, M. (2007). Physiological traits as affected by heat stress in sheep-a review. Small Ruminant Research, 71(1), 1-12. doi: 10.1016/j.smallrumres.2006.10.003
https://doi.org/10.1016/j.smallrumres.20... ). Environmental enrichment consists in introducing objects that stimulate the animals, reducing the monotony of feedlot to which they are commonly housed during the productive process.

Animals in feedlot are restricted to express behaviors compatible with those that the environment allows them to perform, consequently, they fail to perform behaviors characteristic of the species and begin to develop abnormal behavior, such as stereotypies.

The objective of this study was to evaluate the effect of environmental enrichment on animal welfare of Saanen goats during lactation through behavioral analyses.

This study was carried out in the goat-breeding sector of the Federal Institute of Minas Gerais (IFMG) - Bambuí Campus, from May 11th to May 20th of 2015. The Institute is located in the city of Bambuí, Minas Gerais, Brazil at 20° 02’ South latitude, 46° 00’ West longitude, and altitude of 725.9 meters. The weather of the region, according to Köppen classification (1931Köppen, W. P. (1931). Climatologia. México: Fundo de Cultura Econômica.), is Cwa (temperate hot with rainy summer and dry winter). Animals were housed in an over-ground slatted floor facility. Twelve Saanen dairy goats yielding 1.4 liters of milk per day on average at 45 days after calving, corporal condition score of three, and age ranging from 2 to 5 years old, were randomly allocated into four stalls (2.60 x 3.10 m) with three animals in each. Each stall was randomly assigned to a treatment. Stalls were equipped with nipple drinkers and feeding bunk with safety feed fence.

They had ad libitum access to water, roughage (corn silage), and concentrate during the experimental period. The animals were evaluated for 10 days in two different treatments. Animals on stall number 1 and 2 were submitted to an enriched environment, while animals on stall number 3 and 4 were not submitted to any environmental enrichment. The animals were already acclimated to the stalls and their stall roommates, and there was no redistribution or selection of animals, avoiding new territorial disputes by the dominant goats and possible stress source.

The objects used to enrich the environment were evenly placed in the stalls, allowing animals to have free access to them. We used the following objects: plastic PET bottles filled with ground corn as visual and audial attractive (they were suspended up to animals' back height and freely placed on stall floor); cleaning brushes fixed to the stall wall at 70 cm height, so animals could use it to clean or “scratch” their backs; suspended tire; and a tree trunk with 20 cm height and 60 cm long for climbing.

Previously, we observed that animals had the habit of scrubbing their backs on the stall walls as an attempt to clean their hair. We then had the idea to fix brushes to the wall.

During the pre-experimental period, the activities performed by the animals were recorded for one hour. Trained personnel recorded the behavior of each animal. All people responsible for recording animal behaviors were trained in order to increase the observations accuracy. Goat behaviors were observed for two hours during 10 days from 10:00 to 11:00 and from 16:00 to 17:00, using 10-minute intervals. This timing was chosen because the animals had already consumed their feeding and rumination rate had already decreased. The behaviors were recorded using focal-animal sampling method. Each animal was observed during 10-minute period, resulting in 6 observations per hour, 12 observations per day, and 120 observations per animal during the experimental period.

For animals on enriched environment, we also recorded the interactions with the tire, suspended PET, tree trunk, brushes, and free PET on the floor. Data analyses were performed using spreadsheets from Microsoft Office Excel® 2007. Data from behavioral analysis were summarized through descriptive statistics and used to build frequency charts, which aimed at facilitating the interpretation of the obtained results.

Figure 1 depicts the frequency (percentage) of each behavior during the 10-day experimental period.

Self-cleaning and voluntary intake were the most frequent behavior observed on both treatments. Self-cleaning behaviors, which are commonly observed in animals in their natural habitat are highly frequent and aim at preventing and eliminating ectoparasites. The behavior of biting stall parts alternated with food intake was considered abnormal and recorded as stereotyped behavior, as well as licking several times the same spot or standing without moving in front of the wall in the same place for a long time. Oliveira et al. (2015Oliveira, A. P. G., Costa, W. M., Costa, W. M., Nunes, R. A., Dias, N. C. S., & Madella-Oliveira, A. F. (2015). Influência do enriquecimento ambiental nos padrões de comportamentos sociais e anormais de cabras em confinamento. Archives of Veterinary Science, 20(2), 1-7. doi: 10.5380/avs.v20i2.36390
https://doi.org/10.5380/avs.v20i2.36390... ) stated that goats in feed-lot in environmentally not appropriate places tend to show abnormal behaviors, such as stereotypy, self-destruction, and depraved appetite among others.

Fight and competition behaviors were lower in the stalls without enrichment (2.8%) than in the stalls with enrichment pens (5.2%). Dispute for enrichment objects among dominant goats explain this result. Morais, Balbinotti, and Schmidt (2010Morais, C. C., Balbinotti, Z. M., & Schmidt, V. (2010). Comportamento social de cabras em lactação após reagrupamento. Acta Scientiae Veterinariae, 38(4), 425-428. ) point out the necessity to regroup animals according to their physiological and production needs, in order to reduce aggressions among young and old animals that are generally subordinated and dominant ones, respectively. Subordinated animals suffer from stress due to aggressions and decrease their daily feed intake and performance. Animals under stress most certainly reduce their feed intake. Thus, it is reasonable to assume that animals in stalls with enrichment had greater feed intake than animals on stalls without enrichment due to the improvement of their animal welfare level.

Figure 1
Frequency (percentage) of the different behaviors of lactating Saanen dairy goats housed in environments with or without enrichment.

In general, goats on the enriched environment preferred the suspended tire to other possible objects, with an interaction frequency of 38.2%, followed by suspended PET (21.4%), and brushes (21.0%)(Figure2).

The bipedal position, in which goats stand using only their hind legs, is used under natural conditions to catch leaves from trees and bushes. This is one of the few non evolutionary-lost behaviors. According to Malechek and Leinweber (1972Malechek, J. C., & Leinweber, C. (1972). Chemical composition and In vitro digestibility of forage consumed by goats on lightly and heavily stocked ranges. Journal of Animal Science, 35(5), 1014-1019. doi: 10.2527/jas1972.3551014x
https://doi.org/10.2527/jas1972.3551014x... ) as well as Malechek and Provenza (1983)Malechek, J., & Provenza, F. (1983). Comportamiento alimentario y nutrición del ganado caprino en pastizales. Revista Mundial de Zootecnia, 47, 38-48. , goats prefer wide and high located leaves even when good quality pasture is available, which justifies their bipedal behavior.

Animals extensively used the tree trunk placed in the stalls to assume the bipedal standing position. However, we did not measure the length of time the animals remained in this position. Animals constantly assume this position in feed-lots systems and the trunk inside the stall aimed at promoting in feed-lot animal an approximation to natural environments.

The authors thank the Federal Institute of Minas Gerais - Bambuí Campus for aiding the execution of this experiment.

Thumbnail
Figure 1
Frequency (percentage) of the different behaviors of lactating Saanen dairy goats housed in environments with or without enrichment.

Figure 1   Frequency (percentage) of the different behaviors of lactating Saanen dairy goats housed in environments with or without enrichment. 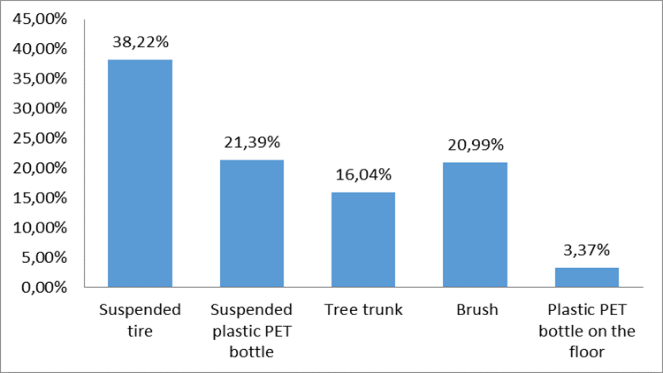