To analyze the outcome of patients treated with gemtuzumab ozogamycin combined with conventional therapy treated at Hospital Israelita Albert Einstein.

14 patients who had high risk features (secondary leukemia, unfavorable cytogenetics, and refractory disease) were treated with gemtuzumab ozogamycin combined with conventional therapy and their outcome was analysed by reviewing their medical records.

Overall response rate was 58%, with 43% achieving complete response, with a median follow-up of 11 months, event-free survival was 3 months. Eleven patients died, 6 of them due to refractory acute myeloid leukemia. Only four patients presented with grade 3 to 4 toxicities and only one patient had sinusoidal obstruction syndrome after bone marrow transplant.

gemtuzumab ozogamycin combined with chemotherapy is a feasible treatment regimen in acute myeloid leukemia patients. However, further studies are necessary to clarify which subgroup of patients may beneft from this treatment.

The outcomes of 14 patients treated with GO combined with conventional chemotherapeutic agents at Hospital Israelita Albert Einstein (HIAE), from 2007 to 2009, were reviewed. The patients had a diagnosis of AML according to the 2001 World Health Organization (WHO) classification and had either relapsed/refractory disease or untreated AML but were unable to tolerate intensive chemotherapy due to age and/or comorbidities. The patients signed an informed consent form before beginning chemotherapy. Pathology reports of bone marrow (BM) biopsies were reviewed for information about baseline hematopoietic cell dysplasia. Karyotype was stratified into good, intermediate and poor prognosis based on the most recent cytogenetic classification of the Medical Research Council (MRC).

Fourteen patients were treated with different combinations of GO and conventional chemotherapeutic agents depending on age, comorbidities and clinical judgment. GO was administered at a dose of 3 mg/m2 I V, over 2 hours, on treatment days 1, 4 and 7. This fractionated regimen was first published by Taksin et al., in 2007, and differs from the initial dose schedule of GO approved by the Food and Drug Administration (FDA), in the United States(1717. Taksin AL, Legrand O, Raffoux E, de Revel T, Thomas X, Contentin N, et al. High efficacy and safety profile of fractionated doses of Mylotarg as induction therapy in patients with relapsed acute myeloblastic leukemia: a prospective study of the alfa group. Leukemia. 2007;21(1):66-71.).

Overall, the rate of CR was 43%; two patients achieved CRp for an overall response rate (ORR) of 58%. Refractory disease and induction death ocurred in 21% of patients each. Median time to CR was 29 days (range 22 to 38 days). Among the seven patients who received GO combined with ara-C for initial induction therapy, the ORR was 43% (2 CRs + 1 CRp), one patient had resistant disease and three patients (43%) died before response could be assessed. The ORR for GO combined with chemotherapy used as salvage was 71% (4 CRs + 1 CRp); two patients had refractory leukemia. A CR was obtained in two of three patients who presented with poor-risk cytogenetics; among the remaining nine patients with intermediate-risk karyotype, the ORR was 67%.

Median follow-up of surviving patients was 11 months. Survival estimates are presented on figures 1 to 3. Eleven patients have either died of or relapsed, for a median EFS of 3 months (95%CI: 0-6.6 months). Eleven patients (79%) died, six of them (54%) due to refractory AML and the remainder due to treatment-related toxicity (three deaths were due to GO and chemotherapy). The median OS was 4 months (95% CI 0-9.5 months). For the eight patients who had a response, median DFS was 10 months (95%CI: 2.6-17.3 months). Among the three survivors at the time of this report, two received consolidation with an allogeneic double CB transplant at the time of CR. The cumulative incidence of relapse for responding patients was 42.5% (95%CI: 6.9-75.9%) at 1 year, and the cumulative incidence of death in CR at 1 year was 21% (95%CI 0.4%-44.4%). 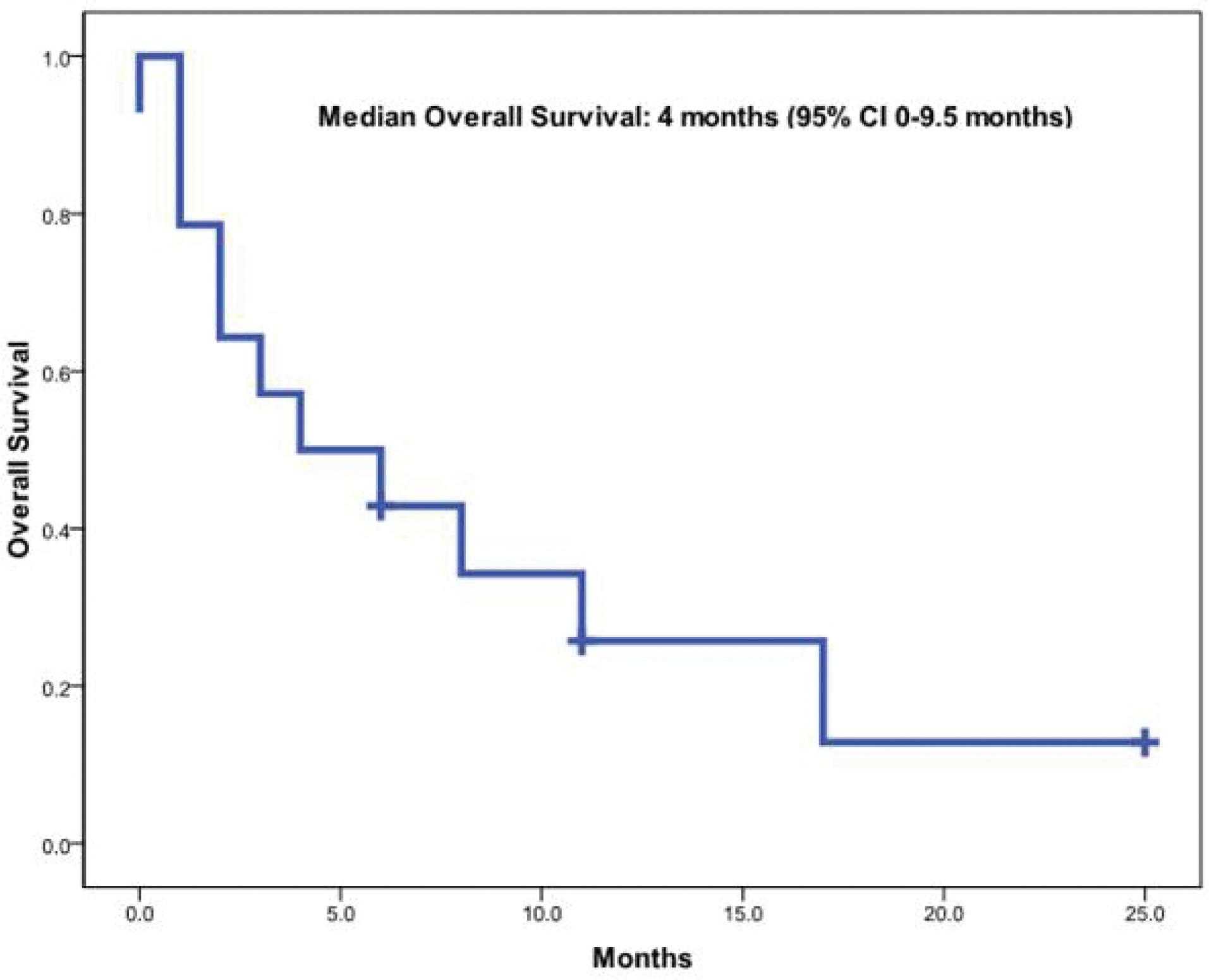 As expected, myelosuppressive toxicity was paramount, with universal incidence of grade 3 to 4 neutropenia and thrombocytopenia. In patients who achieved CR, median time to neutrophil recovery (ANC ≥ 1,000/mm3 for, at least, 2 consecutive days) was 23 days (range 18 to 29 days), and median time to platelet recovery was 35 days (range 22 to 66 days). Grade 3 to 4 hepatic toxicity was observed in three patients, one with grade 3 elevation in bilirubin and grade 4 elevation in gamma-GT and alkaline phosphatase, and two with grade 3 elevation in gamma-GT. No patient developed sinusoidal obstruction syndrome (SOS) while on therapy with GO, but one patient developed SOS post allogeneic MUD SCT two months post-GO.

Chart 1 shows the treatment and outcome of the patients.

Thumbnail
Chart 1
Treatment and outcome of each patient

In our experience, GO combined with chemotherapy proved to be feasible regimen, with a low incidence of grade 3 to 4 toxicities. Yet, long term results confirm the need for improving consolidation treatment and maintaining response after achievement of CR.

It is still controversial whether treatment with GO has any benefits in the therapy of patients with AML. Recently, Pfizer has withdrawn GO from the market, due to disappointing results observed in a phase III trial(2121. Petersdorf S, Kopecky K, Stuart RK, Larson RA, Nevill TJ, Stenke L, et al. Preliminary Results of Southwest Oncology Group Study S0106: An International Intergroup Phase 3 Randomized Trial Comparing the Addition of Gemtuzumab Ozogamicin to Standard Induction Therapy Versus Standard Induction Therapy Followed by a Second Randomization to Post-Consolidation Gemtuzumab Ozogamicin Versus No Additional Therapy for Previously Untreated Acute Myeloid Leukemia [abstract]. Blood. 2009 November 20, 2009;114(22).). In this study, the addition of GO to induction therapy or as post-consolidation therapy did not improve the CR rate, relapse-free survival (RFS), post-consolidation DFS, or OS, but was associated with a significantly higher risk of fatal induction adverse events.

Combining GO with conventional chemotherapy had a modest efficacy in our cohort of patients. We believe that GO is a compound which may benefit selected patients with AML. New trials are necessary to evaluate the role of GO in patients with favorable-risk karyotype AML.

Chart 1   Treatment and outcome of each patient