We hypothesized that the prevalence of exercise intolerance (EI, peak O2 uptake < 83%pred.) is not significantly affected by body mass index (BMI) in adults undergoing cardiopulmonary exercise testing (CPET). We aimed to evaluate the prevalence of EI and the influence of BMI in asymptomatic adults. The results of 780 adults (age 41 ± 13 years) who underwent CPET were evaluated. Participants were stratified according to BMI: normal weight (n = 227), overweight (n = 198), and obese class 1 (n = 155), 2 (n = 131), and 3 (n = 69). After cardiovascular risk assessment, the participants underwent CPET on a treadmill ramp protocol. The prevalence of EI was 20, 16, 21, 25, and 21% in the stratified groups respectively, and no significant differences were found. Predictors of EI were physical inactivity, age, and smoking. The prevalence of EI in asymptomatic adults is considerable, regardless of BMI. The obesity-related reduction in cardiorespiratory fitness seems to be as clinically relevant as in non-obese counterparts.

In obese individuals, whose body mass index is greater than 30 kg/m2, the most striking characteristic of cardiorespiratory fitness is the lower values of peak VO2 corrected for body mass (e.g., peak VO2/kg). However, when aerobic capacity is expressed in absolute terms or as a percentage of predicted adjusted for ideal body mass, several studies have shown that individuals with mild to moderate obesity have aerobic capacity within the normal range for a given age and gender. Thus, it may be advantageous to report aerobic capacity in absolute, relative and percentage values to obtain a more complete view of the cardiorespiratory fitness of obese individuals. Finally, there are data in the literature that suggest that the simple relationship between cardiorespiratory fitness and body mass penalizes individuals with greater body size, such as obese ones22 Dourado VZ, McBurnie MA. Allometric scaling of 6-min walking distance by body mass as a standardized measure of exercise capacity in healthy adults. Eur J Appl Physiol 2012;112(7):250-310,33 Neder JA, Andreoni S, Castelo-Filho A, Nery LE. Reference values for lung function tests. I. Static volumes. Braz J Med Biol Res 1999;32(6):703-17. Accordingly, it would be more appropriate to correct peak VO2 by lean body mass to improve the prognostic utility of aerobic capacity in obese individuals.

The standard for the evaluation of exercise tolerance is the CPET, which is a non-invasive, valid and reproducible exam44 Beaver WL, Wasserman K, Whipp BJ. On-line computer analysis and breath-by-breath graphical display of exercise function tests. J Appl Physiol 1973;34(1):128-32. and has been used for early diagnosis55 Belardinelli R, Lacalaprice F, Carle F, Minnucci A, Cianci G, Perna G, et al. Exerciseinduced myocardial ischaemia detected by cardiopulmonary exercise testing. Eur Heart J 2003;24(14):1304-13.. CPET provides information that enables the determination of the functional condition of the cardiovascular and respiratory systems. One of the most important indications of the CPET is the identification of the presence, etiology, and degree of exercise intolerance (EI). The test may be decisive in cases of dyspnea/fatigue of undetermined cause, as well as to discriminate the preponderant mechanisms intolerance (e.g., ventilatory, cardiovascular or gas exchange impairment). Objective determination of EI in patients with systemic diseases can be made by identifying peak VO2 values below the lower limit of normality, generally < 83% of predicted. In these situations, it is a consensus that the reduction of cardiorespiratory fitness is of a pathological nature33 Neder JA, Andreoni S, Castelo-Filho A, Nery LE. Reference values for lung function tests. I. Static volumes. Braz J Med Biol Res 1999;32(6):703-17.

Unfortunately, the studies that assess cardiorespiratory fitness of obese individuals submitted to CPET are scarce in the literature, especially considering severely obese subjects66 Haapanen-Niemi N, Miilunpalo S, Pasanen M, Vuori I, Oja P, Malmberg J. Body mass index, physical inactivity and low level of physical fitness as determinants of all-cause and cardiovascular disease mortality-16 y follow-up of middle-aged and elderly men and women. Int J Obes Relat Metab Disord 2000;24(11):1465-74.. The available studies have been conducted with small numbers of participants33 Neder JA, Andreoni S, Castelo-Filho A, Nery LE. Reference values for lung function tests. I. Static volumes. Braz J Med Biol Res 1999;32(6):703-17. Whether or not EI is more prevalent in obese compared to normal-weight and overweight counterparts needs further clarification in an enough number of participants. If this influence exists, the values that define EI should be differentiated in obese individuals. Otherwise, the same consensual index could be used. Therefore, to evaluate such correlation is crucial to increase the interpretative power of CPET in obese patients.

The CPET was performed on a treadmill (ATL, Inbrasport, Curitiba, Brazil) following a ramp protocol, which increases in speed and inclination and was individualized according to the estimated maximum VO299 American College of Sports Medicine. ACSM's guidelines of exercise testing and prescription. Philadelphia: Lippincott Wiliams & Wilkins; 2009.. Metabolic, cardiovascular, and ventilatory responses were measured breath by breath through a gas analyzer (Quark PFT, COSMED, Pavona Albano, Italy). The necessary calibrations with air, a standard gas mixture, and with a 3 L syringe were performed before each test in accordance with the manufacturer’s recommendations. The tests were conducted under the same altitude, atmospheric pressure and temperature (22o C) and were supervised by a cardiologist.

The VO2 at anaerobic threshold (AT) was obtained by the v-slope method. The respiratory compensation point (RCP) was identified by the ventilatory method using the ventilatory equivalents of VO2 (VE/VO2) and VCO2 (VE/VCO2)22 Dourado VZ, McBurnie MA. Allometric scaling of 6-min walking distance by body mass as a standardized measure of exercise capacity in healthy adults. Eur J Appl Physiol 2012;112(7):250-310.

Five evaluators conducted the TECP in the present study. All were previously trained by an experienced researcher in performing CPETs, as well as by a cardiologist to identify electrocardiographic changes and signs and symptoms requiring exercise interruption.

Initially, we performed a descriptive analysis. The variables with normal distribution are expressed as mean ± standard deviation or median (interquartile range) in the case of non-normal distribution. Categorical variables were described by calculating their frequency.

We used analysis of variance (ANOVA) for comparing mean values of the variables obtained during CPET among the five groups stratified by BMI. All the analyses were adjusted for the main confounding factors such as age, sex and cardiovascular risk factors. We developed two separate models by gender, one for the ratio standard and one for the allometrically corrected peak VO2.

The prevalence of EI was calculated and its main predictors were evaluated in a multivariate logistic regression model. We considered the BMI groups as the main predictor and the model was adjusted for the main confounders. We used SPSS software version 23 for all the analysis and the probability of alpha error was set at 5%.

The 780 participants were predominantly women, middle-aged and obese. In general, women in the study had a higher prevalence of hypertension, diabetes mellitus, dyslipidemia, physical inactivity and obesity and made use of medicines more often. The proportion of smokers was similar among men and women in the sample (Table 1).

We observed that the main variables obtained in the CPET were influenced by BMI. The peak VO2/kg was inversely related to the BMI. Similar results were observed for the maximum HR and maximum systolic blood pressure (Table 2).

The prevalence of EI was not significantly different among the groups (Figure 1).

After multivariate logistic regression analysis adjusted for the main confounding factors, BMI did not significantly influence the occurrence of EI. The EI was significantly predicted by age, sex, physical inactivity and smoking (Table 3).

We evaluated the physiological responses to the CPET on a treadmill in adults with a wide range of BMI. Our hypothesis was largely confirmed. Despite the influence of BMI on peak VO2, the BMI showed no significant association with EI.

We observed that about 15% of our participants presented cardiovascular limitation to exercise, with VO2 below the lower limit of normal and with an early plateau in VO2/HR11 Wasserman K, Hansen JE, Sue DY, Stringer WW, Sietsema K, Xing-Guo S, et al. Principles of exercise testing and interpretation. Philadelphia: Lippincott Williams & Wilkins; 2011.. Accordingly, our results suggest the need for special attention to individuals with EI, regardless of BMI.

Age-and sex-related changes in peak VO2/kg have already been widely reported in the literature1010 Wasserman K, Hansen J, Sue DY, Whipp BJ, Casaburi R. Principles of exercise testing and interpretation. Philadelphia: Lippincott Wiliams & Wilkins; 2005.. A higher BMI is associated with higher cardiovascular risk88 Thompson PD, Arena R, Riebe D, Pescatello LS. ACSM's new preparticipation health screening recommendations from ACSM's guidelines for exercise testing and prescription, ninth edition. Curr Sports Med Rep 2013;12(4):215-7.. Therefore, is necessary to investigate the influence of BMI on EI free of the confounding effect of variables such as age, sex and classics risk factors for cardiovascular diseases. Thus, the lower proportion of EI in younger individuals in the present study may be can be attributed to the smaller number of comorbidities in this age group. Additionally, cardiac output, heart rate, stroke volume, diastolic volume responses to exercise as well as left ventricular ejection fraction are all decreased with aging2020 James BS, Edward GL Aging-associated cardiovascular changes and their relationship to heart failure. Heart Fail Clin 2012; 8(1): 143–64.. Thus, stroke volume and diastolic volume response are essential contributors to the increase in VO2 and cardiac output during upright exercise in healthy subjects and are altered by normal aging but not gender.

Our findings suggest that cardiorespiratory fitness of obese individuals has been underestimated in the literature. In fact, in a 16-year cohort study, Haapanen-Niemi et al.66 Haapanen-Niemi N, Miilunpalo S, Pasanen M, Vuori I, Oja P, Malmberg J. Body mass index, physical inactivity and low level of physical fitness as determinants of all-cause and cardiovascular disease mortality-16 y follow-up of middle-aged and elderly men and women. Int J Obes Relat Metab Disord 2000;24(11):1465-74. found that physically inactive individuals or individuals who have reduced physical activity over time have increased BMI and higher cardiovascular risks. However, when adjusted for physical fitness, age, and smoking and socioeconomic status, BMI no longer appeared as an independent risk factor. Thus, the cardiovascular risk may be lowered by physical fitness independently of obesity.

This study has practical implications. Traditional methods for evaluating peak VO2 adjusted by body mass, or even by lean body mass, are not suitable for obese individuals. The peak VO2 in percentage of predicted values as well as the expression of cardiorespiratory fitness with allometric correction presents a more accurate representation of the subject's fitness and risk category. Our study adds to the evidence that the cardiorespiratory fitness of asymptomatic obese adults is significantly higher than has been commonly described in the literature, and that EI is not linked to the severity of obesity.

There are limitations to this study that should be considered. The most important of these is that we were unable to assess the body composition of all participants and therefore cannot calculate lean body mass. The assessment of body composition prior to a CPET is not routinely performed which can make the CPET less cost-effective. Instead, body weight has been a simpler correction strategy for the expression of peak VO2. While our study was retrospective, it provided a large enough sample size to stratify patients into obesity classes 1, 2 and 3, and still maintain statistical power. To our knowledge, this has not previously been analyzed.

We conclude that the prevalence of EI in adults is substantial, regardless of BMI and is associated with cardiovascular risk factors other than obesity such as smoking and physical inactivity. In addition, despite the impact of obesity on cardiorespiratory fitness when using the ratio standard of peak VO2/kg, obesity-related reduction on peak VO2 seems to be in a normal range compared to non-obese counterparts. 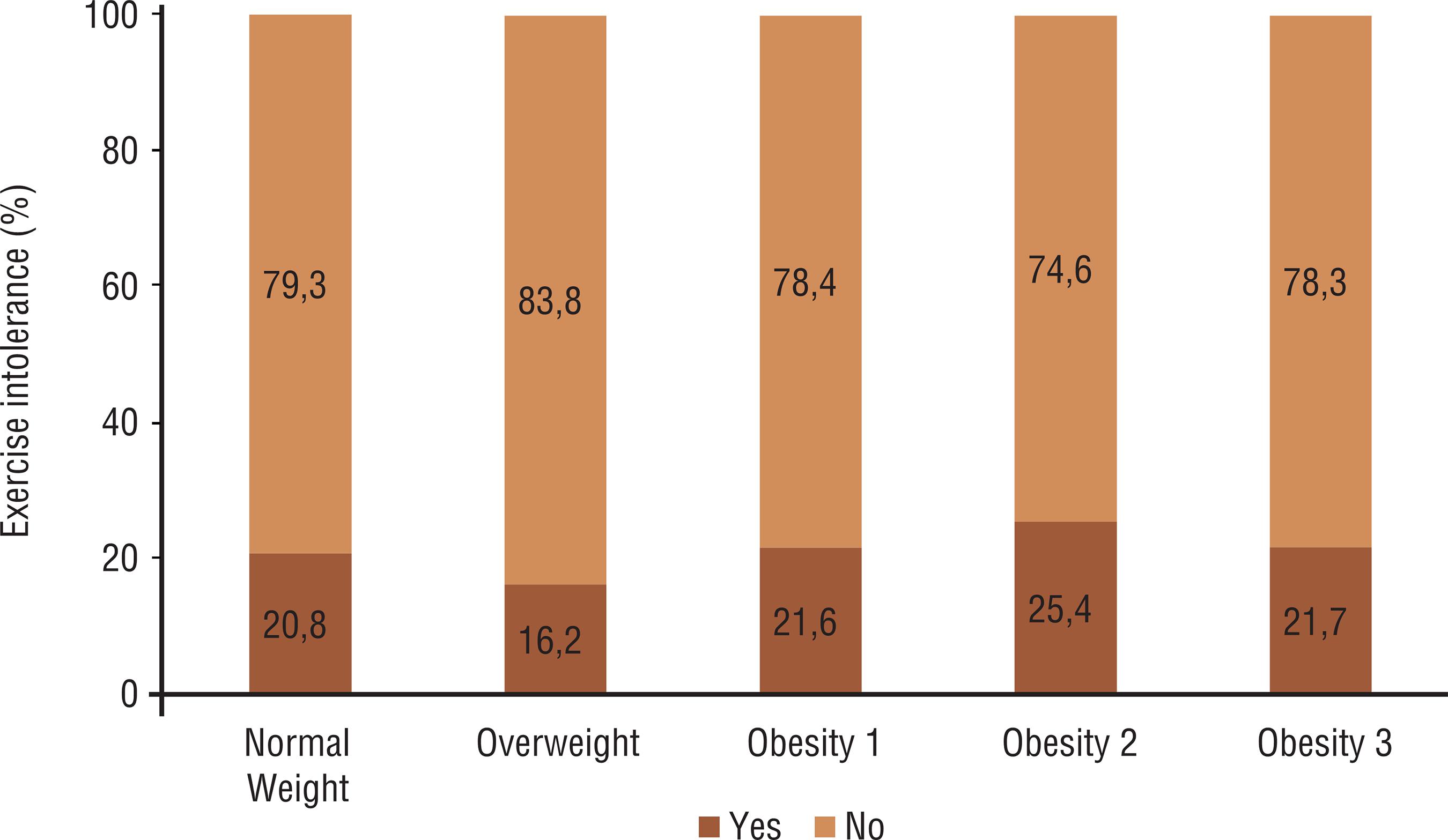