The aim of this study was to evaluate the effect of sucrose concentration in the culture medium on growth and on the establishment of mycorrhizas during the acclimatization of pineapple cv. Pérola. The plantlets were micropropagated in MS culture medium with 0, 10, 20 and 30 g L-1 of sucrose and then they were acclimatized during 12 weeks under greenhouse conditions, in a sandy soil - compost mixture, uninoculated or inoculated with a Rhizophagus clarus isolate. Plantlets from the culture medium with 20 g and 30 g of sucrose L-1 showed higher shoot and root biomass than those from sugar-free medium. Mycorrhizal colonization was lower in plantlets micropropagated in sucrose-free medium, but the intensity of arbuscules did not differ among treatments. In the 12-week period of acclimatization, mycorrhizal colonization had no effect on plant biomass. 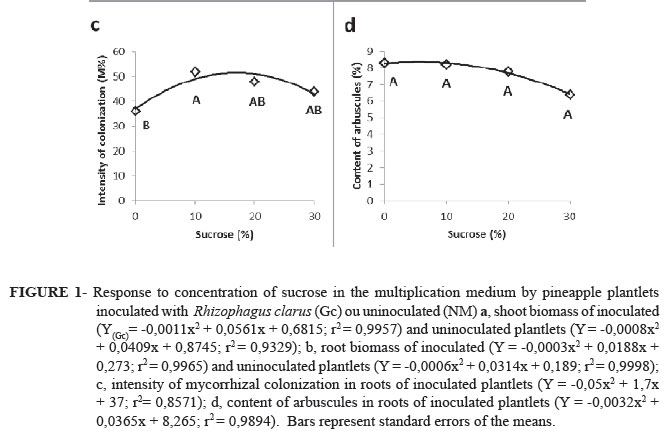