However, despite these studies, little is known about the pattern of how ectoparasites choose their hosts, especially regarding whether there is any individual predisposition to parasitism. Studies that analyze reinfestation can clarify this pattern of choice. In relation to bats, the studies by Esbérard et al. (2005) and Dick and Dick (2006) demonstrated the behavior of ectoparasites in laboratory experiments. Esbérard et al. (2005) showed that the Streblidae species Megistopoda aranea (Coquillet, 1899), Megistopoda proxima (Séguy, 1926), and Strebla guajiro (Garcia & Casal, 1965) search for their hosts by species: Artibeus lituratus (Olfers, 1818), Sturnira lilium (E. Geoffroy, 1810) and Carollia perspicillata (Linnaeus, 1758), respectively. Dick and Dick (2006) analyzed the behavior of Trichobius joblingi Wenzel, 1966 regarding the choice of host and observed that these flies prefer individuals of C. perspicillata that do not present infestation by other individuals of T. joblingi. However, there was no preference between hosts without ectoparasites and with Speiseria ambigua Kessel, 1925, another ectoparasite found in C. perspicillata. Carollia perspicillata is the species of Neotropical bats that is most often recaptured (MELLO et al., 2004; BIANCONI et al., 2006), and it presents prevalence of Streblidae of around 50% (KOMENO; LINHARES, 1999; BERTOLA et al., 2005). Therefore, C. perspicillata is one of the most appropriate species for studies on reinfestation of ectoparasites.

This study aimed to test the following hypotheses relating to Streblidae parasitism in C. perspicillata: 1) Removal of ectoparasites has an effect on Streblidae parasitism, thus demonstrating differences in the pattern of parasitism between capture and recapture; 2) Individuals recaptured within very short times have lower abundances of ectoparasites, thereby demonstrating that reinfestation is dependent on the time for which the individual is at risk of being parasitized; 3) When individuals from which ectoparasites are removed at the time of capture become reinfested, they reach the same patterns of ectoparasite abundance as seen at the time of capture, with an individual pattern of Streblidae infestation in C. perspicillata.

Two individuals presented significant differences in abundance of Streblidae between capture and recapture. One of them had a high intensity of S. guajiro at the time of capture, but no presence of Streblidae at recapture (c2 = 9.0, df = 1, p = 0.003), which occurred three days after capture. The other had a high intensity of T. joblingi on recapture, 342 days after the initial capture, but had not shown any Streblidae at capture (c2 = 6.0, df = 1, p = 0.014) (Table 2).

The two Streblidae species considered in this analysis, T. joblingi and S. guajiro, are species commonly found in C. perspicillata (WENZEL, 1976; KOMENO; LINHARES, 1999; BERTOLA et al., 2005; GRACIOLLI et al., 2006; DICK; GETTINGER, 2005; DICK et al., 2007), and they may coexist in the same host (BERTOLA et al., 2005; SANTOS et al., 2009). Removal of ectoparasites may result in different proportions of ectoparasite species when reinfestation occurs, since individuals without ectoparasites may attract infestation by new species (WENZEL; TIPTON, 1966; DICK; DICK, 2006; TELLO et al., 2008). However, this result is consistent with the study by Tello et al. (2008), who studied the relationship between these two species and showed that there was no interference between the abundances of one species and the other. The speed of the infestation (or reinfestation) process depends on the duration of contact between infested and uninfested individuals, the kind of shelter, the number of individuals in the colony, the parasite population size and the average duration of grooming, among other things (JOHNSON et al., 2004; PRESLEY; WILLIG, 2008; McCOY, 2009). Higher bat densities in their shelters result in increased contact between colony members and thus may increase the chance of infestation (MOURA et al., 2003; JOHNSON et al., 2004; TER HOFSTEDE; FENTON, 2005; PATTERSON et al., 2007). Studies have shown that the shelters used by C. perspicillata, which mainly consist of caves and hollows (TUTTLE, 1976), may have greater abundance of ectoparasites than is observed in open shelters (MOURA et al., 2003; TER HOFSTEDE; FENTON, 2005; PATTERSON et al., 2007). The high loyalty to the shelter and the social stability shown by C. perspicillata (FLEMING, 1988) may contribute towards a population of parasites with constant intensity of parasitism, since the parasite load present in a shelter tends to be balanced between individuals (JOHNSON et al., 2004). The occurrences of reinfestation of individuals in which there was only one day between the removal of ectoparasites and recapture demonstrate that reinfestation can be rapid and can occur within the first hour of contact. A host or social group in a shelter can be considered to be a habitat for Streblidae (TELLO et al., 2008). If we consider each host to be a habitat, it might be expected that some hosts would be better than others, but this could not be demonstrated in the present study. In the case of the individual that had a high intensity of Streblidae at the time of capture but did not show a high intensity at the time of recapture, this recapture occurred three days after the capture, which could explain the difference. Many of the individuals had similar intensities between capture and recapture. Even individuals in the same group may have different intensities of parasitism without any pattern recognition regarding body mass, reproductive condition, sex or age (OVERAL, 1980; PRESLEY; WILLIG, 2008; BERTOLA et al., 2005; DICK; DICK, 2006). Since infestation of bats by Streblidae may occur in shelters through direct contact between hosts or between the shelter and the host (DICK; PATTERSON, 2006), it is possible that the characteristics of the bats' positions during the daytime are more important in relation to infestation and intensity of parasitism. Streblidae can stay in the shelter and use its walls and substrate for larviposition and formation of the puparium, the adult will seek its host after eclosion (DICK; PATTERSON, 2006). The factors that contributed towards the differences in abundance found for these two species of Streblidae are unclear, as are the negative effects of high intensity of parasitism in bats. The low number of samples found at a single collection point, even with a large number of possible hosts, and the large variation in time between capture and recapture demonstrate the difficulties in dealing with reinfestation. Other studies using mark-recapture of hosts and experimental reinfestation should be conducted to obtain a better understanding of the behavior of these ectoparasites and their relationships with specific individuals.

In the present study, it could not be shown that host capture and ectoparasite removal resulted in greater reinfestation in the individual, but the patterns of parasitism by Streblidae at capture were similar to the patterns at recapture. The most highly infested individuals at capture were not necessarily the most highly infested individuals at recapture, thus indicating that there was no individual predisposition or no greater or lesser resistance to parasites.

To Costa, L.M; Luz, J.L; Gomes, L.A.C., Carvalho, W.D. and Freitas, L.N.  the team of the Bat Diversity Laboratory  for reviewing the text and assisting with specimen collection. To Dr. Alejos, J.L.F.L. for assistance with parasitological data. 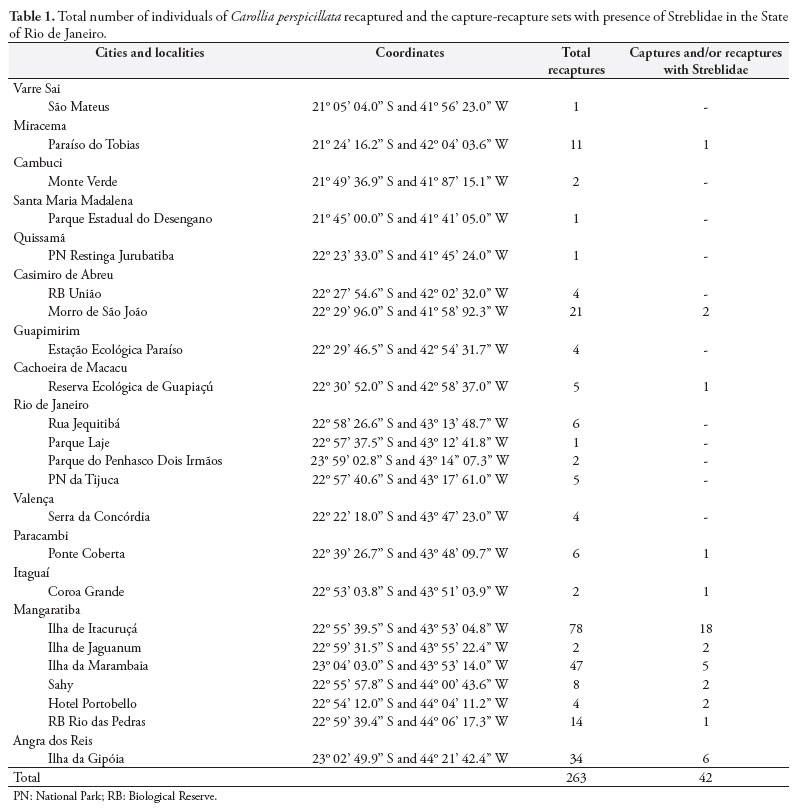