To supply these growth indexes and the expansion of tilapia farming in Brazil, productive practices able to provide larger and high-quality offspring are necessary (Tsadik & Bart, 2007). For that, improved nutrition, feeding and management of broodstock are essential tools (Bhujel et al., 2007), given that the nutrients used by females during vitellogenesis might impact both the quality and the chemical features of eggs (Tyler & Sumpter, 1996; Wiegand, 1996; Izquierdo et al., 2001) and consequently the progeny development (Pereira et al., 2009).

Proteins and lipids stand out as the most important nutrients for mobilization and formation of body tissues (Cyrino et al., 2000). Moreover, both nutrients play a major role in reproduction (Çek & Yilmaz, 2009), since they are the main components of yolk and have a direct influence on embryonic development (El-Sayed & Kawanna, 2008). However, there are few studies about the effects of broodstock feeding or nutrition over progeny features in fish (Izquierdo et al., 2001).

The objective of this work was to evaluate the effects of Nile tilapia (Oreochromis niloticus) broodstock nutrition using diets with different levels of digestible protein and energy on their offspring performance.

The experimental period was from January 21st to February 21st, 2011. The procedures were performed according to protocol #07/2010 and approved by the Ethics Committee of Experimentation and Practices with Animals from Unioeste (CEEAAP/Unioeste).

The experimental diets offered to breeders were formulated at the Laboratory of Nutrition of Aquatic Organisms of UFPR. The feeds were ground in a hammer mill, filtered through a 0.5 mm sieve and pelletized (Meurer et al., 2003a) to 3 mm in diameter (Tessaro et al., 2012a).

When the breeders were at 13 months of age, 2,700 post-larvae were obtained from a single mating period. After the reproduction and production of offspring, 30 five-day-old post-larvae derived from the breeders fed the nine diets were collected in each treatment to measure initial values of weight (mg), standard length (cm) and total length (cm). Afterwards, 1,890 post-larvae of same age were divided into 27 tanks (70 L each) with a storage density of 1 fish.L-1. The tanks were equipped with a semi-closed water recirculation system, mechanical filters and automatic controlled temperature using electric heaters (27±1 ºC).

A statistical randomized bifactorial design (identical to that applied to breeders), composed of nine treatments and three repetitions was used. The offspring from the broodstock fed the nine diets containing the combination between the three levels of digestible protein (28, 34 and 40% DP) and three levels of digestible energy (2,800; 3,400; and 4,000 kcal of DE.kg of diet-1) were regarded as treatments (Table 1). Each 70 L tank containing 70 tilapia post-larvae was considered an experimental unit.

Tanks were siphoned twice daily so as to remove feces and feed wastes. During this process, 20% of total water volume in the experimental units was changed (Meurer et al., 2002). The water temperature was checked twice a day (7h00 and 14h00) prior to cleaning by using a thermometer with a precision of ±1 ºC. The dissolved oxygen (digital oximeter YSI® 550A) and pH (digital pHmeter Tecnal® Tec 5) of water were measured weekly at 07h00, prior to cleaning.

At the end of the experimental period, all fish from experimental units were anesthetized and sacrificed by immersion in an aqueous solution with 250 mg of benzocaine.L-1 (CFMV, 2008). Then, the tilapias were weighed and the standard and total lengths were measured individually with a digital scale (MARTE® AS2000) with ±0.01 g precision and an ichthyometer with ±0.1 cm precision, respectively. Next, all fries were fixed in 10% formaldehyde (Bombardelli et al., 2007) and the effectiveness of sex reversal was analyzed by staining the gonads with acetocarmine and observation using an optical microscope, according to Pompa & Green (1990).

The results were analyzed using multiple regression based on generalized linear models, using a significance level of 5%. These procedures were performed using the software Statistica 7.0®.

The mean values verified for temperature, level of dissolved oxygen and water pH in the experimental tanks were 27.95±1.90 ºC; 6.83±1.18 mg.L-1 and 8.34±0.22, respectively. These values are within the limits considered satisfactory for proper development of Nile tilapias in early stages (El-Sayed, 2006).

The present results indicate that feeding tilapia broodstock diets containing different amounts of digestible protein and digestible energy had no influence (P>0.05) on either growth or survival of offspring during the first 30 days of development (Table 2). In agreement with the present study, Gunasekera et al. (1996) did not observe difference for average body weight, total length and standard length of Nile tilapia larvae from females fed diets with 20 and 35% CP.

Besides the reproductive performance, broodstock nutrition is also important for the quality of offspring. Some studies have reported the relevance of the balance between protein and energy in fish diets (Bomfim et al., 2005; Cotan et al., 2006; Piedras et al., 2006; Ali et al., 2008). If this ratio is unbalanced during fish growth, the proteins in the diet can be used as energy source (Kubitza, 2000) or directed to protein metabolism (Meurer et al., 2002). On the other hand, in the case of broodstock, this balance can be directly related to breeding performance (Lupatsch et al., 2005) or physiology processes such as vitellogenesis (Bromage, 1995).

A previous report about feeding Nile tilapia females diets with 10 to 40% of protein showed that protein levels could influence the gonadal maturation but not the chemical composition of eggs (Gunasekera et al., 1995). A similar effect was also recently reported by Lupatsch et al. (2010), when different feeding managements in females of Nile tilapia were tested, with a diet with 23.5 g of digestible protein.MJ of digestible energy-1.

According to Gunasekera et al. (1996), high levels of protein affect the viability of offspring up to the sixth day of development. Apart from protein, other nutritional components might also interfere with the quality of progeny. The increase in the levels of digestible energy in the diet of tilapia broodstock may improve the post-larvae vigor. Such influence of broodstock nutrition on offspring performance seems to be caused by physiological processes (Navas et al., 1998) related to both production and incorporation of vitellogenin in oocytes (Coward et al., 2002). The yolk is the main nutritional source of fries during their first days of development because it makes elements important for molecule formation available (Vassalo-Agius et al., 2001) or acts as an energetic component (Tyler & Sumpter, 1996).

Although the yolk sac ensures the endogenous nutritional storage during the initial life stages (Mazorra et al., 2003), little is known about the influence of maternal nutrition on growth of post-larvae when they no longer depend on their endogenous reserves. Ng & Wang (2011) verified that the utilization of crude palm oil in the diet of tilapia broodstock influenced the gonadal development, egg production, hatchability and larval normality. However, the offspring development up to total yolk consumption was unaffected by the oil source.

Studies on fish broodstock nutrition focusing on longer periods of offspring development, in either fries or juveniles, are even more restricted. Sink & Lochman (2008) fed breeders of Ictalurus punctatus diets containing 4 and 10% of lipids and raised the offspring up to 37 days of age, observing no effects on their growth.

The period of experimental feeding of the broodstock might also influence their reproductive and offspring performance. This period possibly had no effects on present results, since breeders were fed for 11 months and most research studies recommend experimental periods of, at least, 165 (El-Sayed et al., 2005) or 175 days (Ng & Wang, 2011) to observe dietary effects on tilapia breeding. Therefore, broodstock diet seems to interfere on offspring performance only during the periods of endogenous feeding of larvae, particularly related to yolk composition.

Another aspect to be remarked concerns the high fat content in diets formulated with the highest levels of digestible energy. Regardless of its effects on offspring, these diets might cause medium-term or long-term physiological damages to the broodstock since they promote liver fat deposition and steatosis (Tessaro et al., 2012b). Thus, furthers studies related to overall dietary effects on both fish breeding performance and reproductive life are recommended.

Evidence suggests that female nutrition might influence the reproductive performance or offspring quality in different manners. Although this management can affect the viability of offspring during early stages, the results of this study indicate that there is no influence of broodstock nutrition on growth or survival of progeny during periods when they no longer depend on endogenous reserves as feed or nutritional sources.

Feeding diets containing different levels of digestible protein and digestible energy to tilapia broodstock according to the experimental design adopted has no effects on growth or quality of offspring during 30 days of development. 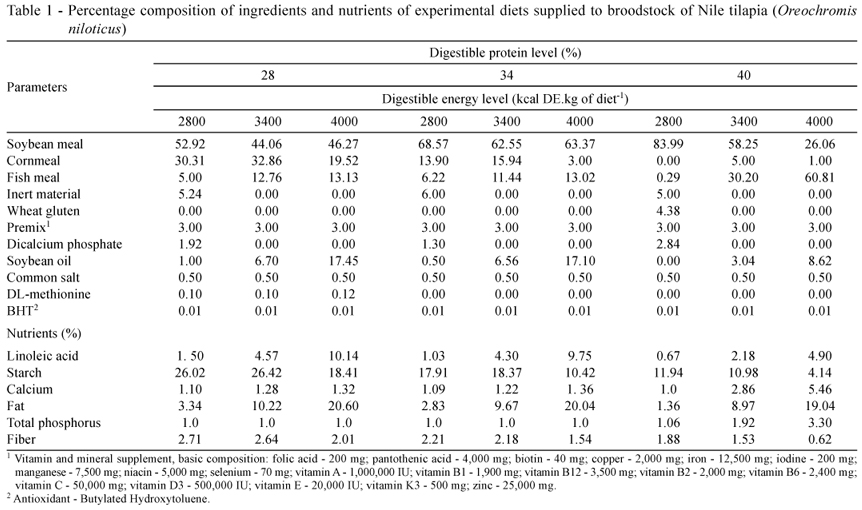