CONCLUSION: The kidneys submitted to 30' of ischemia/reperfusion are subject to a larger restitution of the blood flow in comparison to the Group which had a longer time.

The ischemia/reperfusion injury (IR) can be defined as a whole of alterations due to privation and re-establishment of the oxygen supply to tissues and organs. It is a complex phenomenon which involves not only intracellular effects, but also an inflammatory response to the injury.

The pathogenesis of the ischemia/reperfusion is not completely understood. There are evidences which relates it with the decrease of mithocondrial ATP production, loss of the selective permeability of the cell membranes, increase of intracellular sodium and calcium leading the renal cell to injury or death.

A renal injury caused by ischemia makes relation with different medical areas, being essential to the Renal Surgery, Vascular and Transplantation.

The lateness in re-establishing the renal function after the transplantation results in oliguria, increase of the immunogenicity of the graft and episodes of acute rejections. These situations might be related to the donator and the kidney receptor (pre-renal, renal and post-renal factors associated to the transplanted kidney).

Experimental studies evidenced that both the ischemia and blood flow restitution in ischemically injured kidneys after hypothermic preservations, activate a complex sequence of events which sustains the renal injury and have a central role in the late kidney's function development1-3.

Previous researches in animal models had demonstrated that the consequences of ischemia/reperfusion depend on the duration, resulting in biochemical alterations and even cellular necrosis. Thompson et al.4, in a retrospective human study, had evaluated the impact of ischemia time in patients with only one kidney submitted to open partial nephrectomy. They concluded that 20 to 35 minutes are, respectively, the maximum time for the lonely kidney tolerate hot ischemia and cold ischemia. Even with such many studies, we observed that there is not a consensus in the literature about the relation to the maximum hot ischemia period that the kidney does not suffer irreversible injuries.

It is known that the consequences of the ischemia in the different tissues depends on its duration, moreover many injuries are developed during the stage of re-oxygenation reperfusion of the tissue. The mitochondria are important targets of injuries done by the ischemia and reperfusion process5. Inside this organelle there is a decrease of NADH, ADP/ATP and ATP synthetase activities, besides increasing the phospholipase A2 activity. Furthermore, there is also an acute accumulation of calcium and free radicals production by the mitochondria. The association between these events might be responsible to the injuries and cellular death due to the reperfusion, possibly because of the transition phenomenon of internal mitochondrial membrane permeability1.

Recent studies in the renal ischemia pathogenesis permit us to make a temporal relationship between the clinical stages and the cellular changes. Initially, the kidney is exposed to ischemia, than the renal functions decrease and the parenchyma injuries start. The intracellular depletion of ATP is intense, prevailing epithelial and endothelial injuries: starting the production of reactive oxygen species and activation of inflammatory mechanisms. The intra-renal mechanisms of protection are requested and if the ischemia is interrupted, there is a complete recuperation in this stage. On the contrary, there will be larger damages, mainly after the reperfusion6.

The reperfusion injury can be measured by many mechanisms, including the production of reactive oxygen species, cellular displace, microvascular compression, polimorphonuclear leukocytes and hypercoagulability. The reperfusion leads to the congestion and red blood cell accumulation by the introduction of reactive oxygen species in the compressed vessels2.

The maximum hot ischemia time before the occurrence of irreversible injuries continues to be a discussion point. Unfortunately there are not pre-operatories or intra-operatories methods to evaluate the real damage. The surgeons must keep their efforts to maintain the ischemia time as little as possible. We developed our project aiming to appraise the differences between the renal blood flow after distinct times of ischemia.

This article has the approval of the Pontifical Catholic University of Parana Ethical Committee.

The work had initiated with Group A. It was done an anesthetic induction, followed by a median laparotomy, exploring the abdominal cavity, indentifying and dissecting the left renal pediculus. After that, the venous and arterial left vessels were occluded with a Bulldog type clamp for 30'. Later on the ischemia time, the clamp was taken out and the reperfusion was started, after 1 minute the laser flow meter was positioned in the superior, medium and inferior regions of the left kidney to measure the respective blood flux. The measures were repeated in the 5th and 20th minutes (Figure 1).

The same procedures were done in Group B, however the clamping time of the left renal arterial vessel was 60 minutes.

After this process, the rat were submitted to euthanasia by giving the anesthetic in a three times higher dose. The data obtained were statistically analysed.

The results obtained consisted in the values of the renal flow from 10 rats from Group A and 9 rats from Group B. During the anesthetic procedure, one rat from the second Group deceased.

The results were expressed in means, medians, minimal values, maximum values and standard deviations. To compare the 2 Groups in relation to the mean flow, it was used the t Student test for independent samples. The comparison of the evaluation moments inside each Group was done by using the variance analysis with repeated measures. The normality condition of the variables were evaluated with the Shapiro-Wilks test. The values p<0.05 indicated statistical significance. The data were organized in Excel worksheet and analysed with the computer program Statistica v.8.0 (Table 1).

The ischemia plays an important role in many different per operatory clinical situations. Although the blood revascularization to the ischemic organ is essential to prevent the irreversible cellular injury, the reperfusion might worsen the damage caused by the isolated ischemia. The ischemia period itself is sufficient to cause a significant renal loss of function, but the injury caused by the reperfusion showed to be more harmful than the isolated ischemia because it is produced a greater local inflammatory response leading to systemic damages2.

The rat's kidney exposed to chronic ischemia develops diffuse tubular atrophy, interstitial fibrosis and good glomerular preservation. The only rare injury in humans but frequent in rat is the intersticial inflammation6.

The kidneys are more resistant to ischemia than other organs, in opposite to the liver which its histology is precociously affected. Many studies in animals demonstrated the renal tolerance to ischemia for more than 30 minutes, but there is a concerning about the total recuperation of the renal function after all this period of time2.

In a study with dogs it was observed that a period longer than 30' could lead to a renal recuperation7. In study with pigs, Humphreys et al.8 observed a renal function deterioration in kidneys submitted to a ischemia period of 75 minutes.

The time of ischemia could influence in the animals' survival. In our study, the Group A showed 100% of survival and Group B gave the evidence of 90%. Similar results were found in a study which the rate of rat survival submitted to a mean ischemia period of 37.5 minutes while the animals who had died were proceeded to a mean time of 81 minutes1.

It was observed in our research that after the first and 5th minute of reperfusion, there were not found significant results in both groups. Although in the flux analysis after the 20th minute of the left arterial renal clamp withdrawal, significant evidences were observed. The rat submitted to 30' of ischemia showed a greater flow in comparison to the animals submitted to 60 minutes. This information demonstrates that the longer is the ischemia time, the greater is the renal damage, as the blood flux to the organ survival is lower.

The absence of significant results at 20' may be due to the technique found to adapt the flow meter to the kidney, mainly in the first minute.

It is not possible to conclude what was the most harmful mechanism to the kidney: the prolonged ischemia or the reperfusion.

In the initial project, one of the objectives was to analyse more than the renal blood flow, but to evaluate the possible histopathological alterations in different times of ischemia. However, due to the difficulties in interpreting the laminas, the lack of comparative models and the unavailability of the lab pathologist, we chose to change the initial theme of the project. We observed that in the majority of the studies, the renal injuries are measured by biochemical parameters (creatinine and diuresis), energetical supply (ATP, ADP, AMP), histological alterations and others.

The results found in our project were compatible to literature and statistically significant, nevertheless the flow meter is not the ideal method to evaluate de vitality of the organs because it is subjected to many external bias, such as the rat movement, difficulty to adapt the equipment on the kidneys and delayed in measuring the stabilization of the flux. Moreover, the laser flow meter is not frequently mentioned in the literature as a method of analysis.

Even with the greater experience of the surgeons, the time limit of 30 minutes is still a safe border between irreversible injuries to the kidney when it has no proper cooling preservation.

It is necessary to make future studies to define which are the better parameters to measure the ischemia/reperfusion injury, moreover it is indispensable the development of methods to protect the kidneys during the lesions. 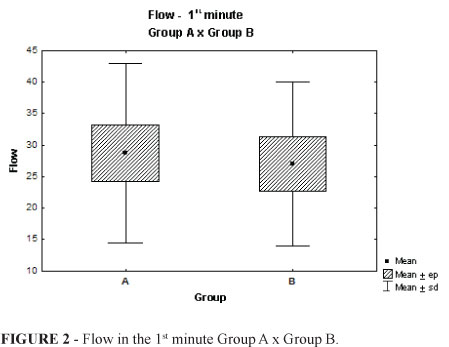 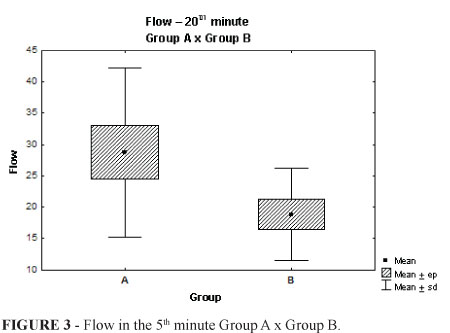 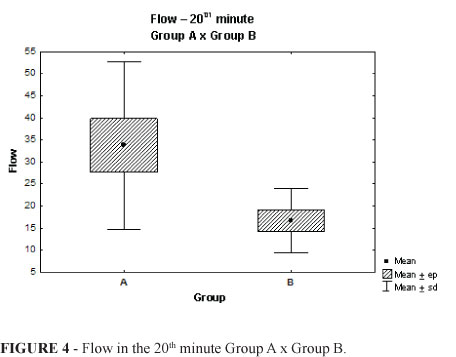 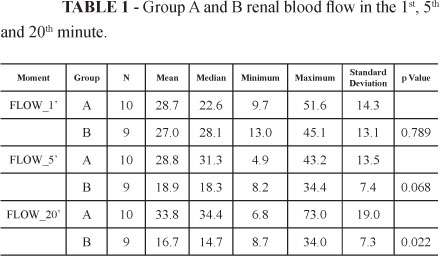