Farming of the freshwater fish is emerging in Brazil and many species from the wild are promising. The teleost matrinxã (Brycon cephalus) holds several characteristics such as fast growth rate, high commercial value and adaptability to artificial raring conditions, which make it a promising species for commerce. The use of pesticides in aquatic environment is frequent in Brazil, and methyl parathion is very common in aquaculture. We have determined the enzymatic activity of acetyl cholinesterase in white muscle and brain of matrinxã exposed to 2ppm of environmental methyl parathion for 24 hours. There was 64% and 69% of acetyl cholinesterase inhibition in muscle and brain respectively. These activities were not recovered after 8 days from exposure to this pesticide. It can be concluded that acetyl cholinesterase from those tissues was inhibited by small amounts of methyl parathion, and the main effect was observed in the brain.

Farming of the freshwater fish is emerging in Brazil and many species from the wild are promising. The teleost matrinxã (Brycon cephalus) holds several characteristics such as fast growth rate, high commercial value and adaptability to artificial raring conditions, which make it a promising species for commerce. The use of pesticides in aquatic environment is frequent in Brazil, and methyl parathion is very common in aquaculture. We have determined the enzymatic activity of acetyl cholinesterase in white muscle and brain of matrinxã exposed to 2ppm of environmental methyl parathion for 24 hours. There was 64% and 69% of acetyl cholinesterase inhibition in muscle and brain respectively. These activities were not recovered after 8 days from exposure to this pesticide. It can be concluded that acetyl cholinesterase from those tissues was inhibited by small amounts of methyl parathion, and the main effect was observed in the brain.

Pesticides are among the most hazardous chemicals to men and ambient. In fact, the lack of information about risks of poisoning causes the improper and excessive use of them in different combinations, mainly in Southeast Brazil where the highest selling rates are recorded (MEYER et al., 1999). Insecticides input take place to protect agricultural crop against damaging caused by insects. However, these chemicals may reach other ecological compartments as lakes and rivers through rains and wind, affecting many other organisms away from the first target. Only 0.1% reaches the specific target (RAND & PETROCELLI, 1984; AGUIAR, 2002).

The injuries of insecticides to aquatic environments are incontestable, and fish are able of bio-accumulation due to direct exposure to chemicals or ingestion of contaminated preys and food (RAND & PETROCELLI, 1984). Methyl parathion is an organophosphorous largely used in Brazil to avoid agriculture losses due to fruit flies, bugs, and other insect attacks. In addition, methyl parathion has been often used in our fish farms to prevent fingerlings losses due to predation by Odonata nymphs and Chironomidae (FIGUEIREDO & SENHORINI, 1990).

Matrinxã is a freshwater teleost fish widely reared in Brazil (CASTAGNOLLI, 1992), directly exposed to pesticides in both natural and farming conditions. Acetyl cholinesterase (AChE) is a biomarker extremely used in aquatic ecotoxicology studies (KIRBY et al., 2000), and is a fairly sensitive enzyme to low environmental organophosphorous concentrations. According to AGUIAR (2004), methyl parathion inhibits AChE activity in fish, resulting in a neuronal system blockage. In this case, the muscular system may keep moving without control until paralysis, convulsion and death.

Fish were purchased from the commercial fish farm Águas Claras-Mococa, SP, and held in a 2000L tank at 25°C for one month. Fish were fed twice a day with commercial pellets (35% crude protein) in a re-circulating water system. Water quality parameters were daily monitored in order to maintain the best growth conditions for matrinxã. At the time of the trials, 56 fish (weight = 49.5 ± 1.7g and length = 14.5 ± 0.5cm) were equally distributed in seven tanks (90 liters each) with constant water flow, plenty aeration and heating at 25°C. After 24h, five tanks received methyl parathion (OP) in the commercial form of Folidol-600Ò at a final concentration of 2ppm, corresponding to 1/3 of 96h-LC50 for B. cephalus as reported by AGUIAR (2004), and the two others did not receive any chemical (control groups). After 24h of exposure, two tanks were randomly sampled (Initial Control and one OP); the fish were quickly anesthetized with eugenol and killed by pinching the spinal cord. The brain and samples of white muscle were excised and stored at 20°C for posterior AChE assays. The water flow was reestablished in the other five tanks for recovery. Fish brain and white muscle samples were collected 24, 48, 96 hours and eight days after the beginning of the recovery. The last control group (Final Control) was sampled at the same time of the eight days of recovery (8 days).

Data analysis: The data are presented as means ± SD. Comparisons between the trial groups and the controls were done through the statistic tests ANOVA and TUKEY-KRAMER at P<0.05.

The water quality parameters were kept nearly constant: temperature (25.7 ± 0.9°C), oxygen (5.66 ± 0.07mg l-1), water conductivity (74.3 ± 4.8mS.cm) and pH (7.0). The enzyme activities of AChE in the white muscle of the control groups were constant in the course of the trials (WALLACE x 10-4 ± 7.35 x 10-5mmol min.mg-1 of protein). However, the white muscle AChE of fish exposed to methyl parathion was stoutly inhibited near 64%. Significant decrease (P<0.05) of the specific activity of AChE in the central nervous system was also observed in matrinxã exposed to the organophosphorous for 24h. Furthermore, AChE activity was kept low in both tissues even after eight days of exposure to methyl parathion (Figure 1). The fish were kept alive in spite of poisoning, and 31% of the initial AChE activity was observed in the white muscle after eight days of recovery. The brain AChE activities were also constant in the control groups (4.8 x 10-3 ± 1.1 x 10-3 mmol min.mg-1 of protein). The exposure of matrinxã to methyl parathion resulted in decrease of almost 69% of the brain AChE activity. This remained low even after eight days of recovery but a slight tendency of increase was observed differently from what was observed in the white muscle. In white muscle the activity of AChE was the same after eight days of recovery. 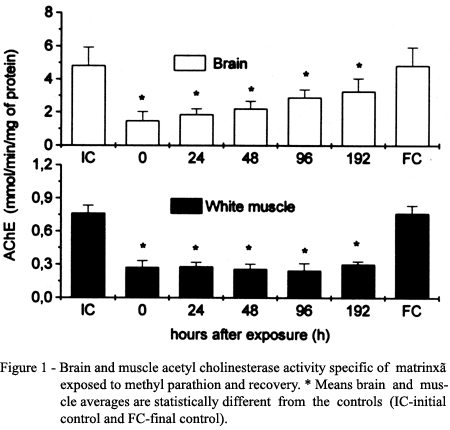 Pesticides as organophosphorous and carbamates are the main insecticides in the agrochemical market, which yearly circulates more than 2.5 billion dollars. One hundred different organophosphorous are reported in the United States, where 200 million acres are sprayed every year (HOFFMAN, 1995). In spite of Brazil presenting a unique ecological system, methyl parathion is extremely used in its fields. The large use of pesticides in Brazil ranks it as one of the five most world consumers (EXTOXNET, 1999). Methyl parathion is an organophosphorous insecticide classified as a restricted use pesticide (RUP), by the US environmental protection agency (EPA, 1997). Only authorized staff can manipulate methyl parathion that seems to be not accumulated or persisted in environment, since plants and animals are able to metabolize it quickly (EXTOXNET, 1999; HOWARD, 1989).

Decrease of AChE activity by methyl parathion intoxication has been reported in different animals and fish as matrinxã (BENKE & MURPHY, 1974; RAO & RAO, 1984; CHAMBERS, 1995; AGUIAR, 2002.). However, most AChE studies are done in fish brains, because the most evident effects are observed in nervous tissues. Matrinxã was exposed to methyl parathion concentration of 2ppm for 24h, because previous studies of AGUIAR (2002) established these parameters as suitable for AChE inhibition. The brain of matrinxã showed the highest AChE inhibition, as expected. The AChE inhibition was compared in different tissues of Nile tilapia exposed to 1/3 of methyl parathion LC 50 for 48h, and the brain was the more affected (RAO and RAO, 1984). The inhibition of the brain AChE was followed by muscle, gills and liver. The AChE inhibition is fairly related to the degree of tissue enervation. Hence, it can be said that the highest is the AChE concentration the highest is the inhibition susceptibility.

Matrinxã is a very consumed fish in Brazil and other Latin America countries (CASTAGNOLLI, 1992). BOONE & CHAMBERS (1996) reported this fish as more resistant to methyl parathion than mice and other mammalians, which have lower AChE stocks. In addition to the higher tolerance of fish to methyl parathion, matrinxã is kept alive after exposure to it in water ponds treated with 0.25 to 3ppm (FIGUEIREDO & SENHORINI, 1990). By the way, this is the range of such OP usually employed by fish farmers in the field.

Methyl parathion is bio-transformed into a molecule very similar to acetylcholine, directly responsible for the animal poisoning. This molecule binds to AChE, avoiding the breakdown of acetylcholine by AChE. Acetylcholine is the primary neurotransmitter in the sensorial and neuromuscular systems of fish; its level is regulated by AChE, which hydrolyses acetylcholine into acetic acid and the active product choline. These are reabsorbed and used as raw materials for the continuous acetylcholine production. The uninterrupted synthesis or the inability of hydrolyzing acetylcholine is responsible for a continuous or excessive stimulation of the nerve/muscle fibers (KIRBY et al., 2000).

Fish exposed to methyl parathion do not recover AChE activity even after long periods of time (BENKE & MURPHY, 1974; CARR, 1995; WALLACE & HERZBERG, 1998). Fish have also the AChE recovery period much longer than mammalians (WALLACE & HERZBERG, 1998). Matrinxã did not recover completely AChE values even after eight days under the control conditions. WALLACE & HERZBERG (1998) demonstrated the inability of reactivate the brain AChE in rainbow trout after exposure to methyl parathion. The channel catfish Ictalurus punctatus did not recover brain AChE ten days after the return to control conditions (CARR et al., 1995). The pumpkinseed sunfish (Lepomis gibbosus) exposed to parathion and methyl parathion had no brain and muscle AChE recovery even four weeks after reestablishment of control conditions (BENKE & MURPHY, 1974). Our results corroborate the proposal on the phosphorilation of AChE as a mechanism of increasing the enzyme resistance to hydrolysis (enzyme aging).

The Neotropical fish matrinxã exposed to methyl parathion presents strong inhibition of AChE in the white muscle and brain; its ability to recover from it is low and one week is not enough to clean this effect in both tissues. The effect on white muscle is more residual than that observed in brain. Other approaches on the action of methyl parathion in this species such as histological and cytological studies are still lacking to make possible more accurate conclusions about additional risks to environment, fisheries or people exposed to such chemical. It is also clear that methyl parathion may be hazardous to people if contaminated fish are consumed or if people are directly exposed to methyl parathion or contaminated water. More knowledge on the environmental fate of this xenobiotic will allow fish farmers to decide whether they can or not use methyl parathion to control pest or if they have to find new alternatives that are less dangerous.

The authors are thankful to the colleagues of the Adaptive Biochemistry Lab for the logistical support. This research was partially supported by FAPESP and CNPq.